One of the first idioms many of us learn is the odd saying “In the doghouse”. That is a person is in the doghouse because he or she has fallen in disfavor because of some mistake that was made by that person.

I don’t know of any instances where somebody has really been exiled to an actual doghouse for punishment, aside from comical scenes in movies or teevee shows. “In the doghouse” is sometimes used synonymously for cases when the husband is told that he will be “spending the night on the sofa” as punishment for some transgression or error. While both phrases are used figuratively, the sofa punishment is sometimes literally carried out.

Both idioms are usually used in the context of a domestic relationship such as when the husband neglects to remember a wedding anniversary or the wife’s birthday. This stereotype is not restricted to opposite sex domestic relationships. Believe me it happens in the LGBT world, too. If you don’t want to be sent to the doghouse or spend the night in the living room, please remember your partner’s feelings. 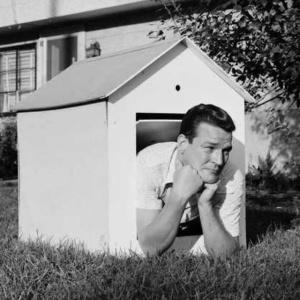 A few years ago, I was the person sending my partner to the doghouse. He claimed he had totally forgotten our special dinner date for Valentine’s Day. We had made elaborate plans for the evening, but he didn’t even bother to phone that he had to work late. It felt to me, like a total snub. When he finally arrived, he hadn’t even remembered to bring a Valentine’s card. Yeah, it was that bad. Needless to say, he spent the night on the sofa in my den.

The Valentine’s Day incident was an anomaly. Usually, I’m the forgetful or neglectful person. I’m often left to try and figure out why someone is angry with me. By default, I’m usually the one who’s in the doghouse with some person.

Being in the doghouse is not necessarily restricted to the domestic scene nor to gender. Sometimes the news media will say a senator is in the doghouse with her constituents over some vote or statement about an issue. We understand that she will not literally spend the day in a doghouse, but wouldn’t it be wonderful if she did?

If you find yourself in the doghouse, or spending the night on the sofa, how do you get out of the situation? Sadly, there are many folks who don’t know how this is done. First and foremost, never overlook the sincere apology. Couple the apology with the authentic vow to do better in the future. If the situation merits, don’t underestimate flower power. The day after that one infamous Valentine’s incident, my bf  bought me a handsome arrangement of Shasta daisies–my all time favorite flowers.

The Blue Jay of Happiness likes this tidbit from Ogden Nash: “A door is what a dog is perpetually on the wrong side of.”

An eclectic guy who likes to observe the world around him and comment about those observations.
View all posts by swabby429 →
This entry was posted in cultural highlights, Friendship and tagged idiomatic phrases, in disfavor, in the doghouse, in trouble. Bookmark the permalink.