Yank magazine was one of those morale building things regularly passed out to soldiers in World War Two along with cigarettes and chewing gum. It was positive propaganda, cartoons, and pin-up girls–just the right thing in the mind -numbing pressure of wartime. In fact, Yank was a uniquely Second World War phenomenon.

I have one copy of that famous magazine, published by the War Department. It was paired with the issue of  LOOK that was featured in this blog, last week. The two magazines bookend the war because the issue of LOOK came out before Pearl Harbor and this issue of Yank appeared after VJ Day.

Like that issue of LOOK, this magazine is heavily contaminated with mildew and other fungi, so examining it indoors has been out of the question. I took a few preliminary snapshots of this issue of Yank outdoors, in order to share them with you today. This will be on my short list of documentation to properly, digitally archive.

The Empire of Japan formally surrendered on August 15, 1945 and the formal announcement was made on September 2nd at the signing of the surrender document. This issue of Yank was published less than a week later.

The first article was aimed at service members who were eager to come back home and resume civilian life. The article cautioned that processing out of the service might take much longer than hoped. It also tried to deflate any idealized visions of civilian life that service people probably imagined while they were deployed. There were many big questions on the minds of military personnel.

Of course, the main story was that the war had ended, at last. The long, horrible ordeal was finally over.

There was space to recap the closing days of the war. 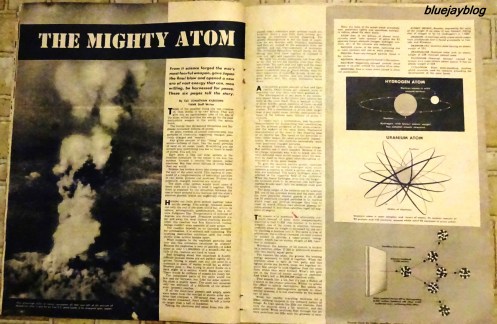 There was a lengthy article about the newly revealed weapons of mass destruction that played a role in the closing days of conflict.

The last page of the magazine again cautions service members not to get their hopes too high and to please remain patient when reintegrating with society.

The Blue Jay of Happiness has a joke to share from Yank magazine. “Two young soldiers were exchanging their experiences of the service in the Army. ‘My sergeants are wonderful’, said one soldier.
‘I wish I could say the same about mine,’ said the other.
‘You could if you could lie as I do.'”

An eclectic guy who likes to observe the world around him and comment about those observations.
View all posts by swabby429 →
This entry was posted in cultural highlights, History, Vintage Collectables and tagged US Department of War, wartime morale, World War Two, Yank Magazine. Bookmark the permalink.