There are few things as infuriating than finding litter on the yard. At a minimum, each morning, I discover a beer can, or liquor bottle, or fast food packaging. Picking it up has become so routine that I crafted my own litter spike. Using it keeps me from having to stoop over to pick up the trashy items.

Each year, new college-age neighbors move into the four-plex next door. In many instances, the apartments are their first homes away from their parents’ homes. As often happens with college students, they throw parties. Frequently, those parties overflow onto the street. The aftermath yields the red plastic Dixie cups, beer cans, cigarette butts, and other forms of assorted debris.

I try my best to be an assertive, yet friendly person as I request that the new neighbors keep an eye on their party guests. I carefully explain that I don’t appreciate the extra chore of picking up after them.

The resident litterbugs are nothing new to the neighborhood. I’ve been chasing trash and bringing it to the attention of young neighbors for over 30 years. I feel like I have taken the role of “homeroom instructor” for each new crop of recent high school graduates.

One of the ironies of such blatant thoughtlessness is that I must be thoughtful about how I interact with the miscreants. If I’m too stern, future incidents of littering will be worse and done out of spitefulness. If I’m too lenient, no remedy will happen. Frequently, I just shake my head and wonder about the parenting skills that were exercised during my neighbors’ childhoods, or not.

The fact is, there are thousands of people in similar situations. This type of thoughtlessness is common in many neighborhoods in hundreds of towns and cities everywhere. We see this careless disposal of trash along the roadsides and on top of the road surfaces in rural areas. It is a manifestation of the disregard people have towards one another and our surroundings.

I could mention other forms of thoughtlessness here, but I don’t want to be thoughtless and dump all of my frustrations into this blog post.

Why do we become thoughtless? The reason lies in the definition of the word.

One might say that thoughtlessness is the opposite of mindfulness.

Thoughtlessness is a product of habits. Settled patterns are things we do without having to put any thought into them. Some are good habits, like thoughtlessly fastening seatbelts before driving away in our vehicles. Others are harmful, like mindlessly checking ones phone for messages while driving.

Why do we thoughtlessly develop habits? It’s because thinking is sometimes painful. Thinking leads us away from established patterns and towards unforeseeable consequences. In a deeper level, habits are rituals. Our rituals lull us into a sense of comfort and familiarity. We go along with socially accepted opinions because it is painful to go against the stream. Orthodoxy is a more sophisticated way of saying “comfort zone”. 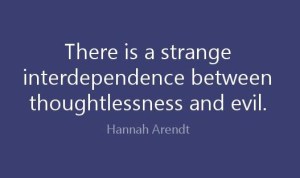 The mind is fearful of the unknown, so it reflexively returns to the mentally comfortable familiar, known ways of thinking and behavior. By resisting the painfulness of thought, the mind retreats to the less painful cycle of patterns. The patterns are habits. Just as driving through heavy downtown traffic with the car’s cruise control activated, our habits can create serious problems when dealing with other people. Instead of crunching other vehicles’ fenders, we crush other people’s feelings.

To eliminate thoughtlessness is simple but not easy. It’s difficult to change our own habits. It’s even more difficult, if not impossible, to change other people’s habits. It’s easier and more probable that we and others will usually revert back into the comfort zone of habit. The best we can do is remember to be mindful because mindfulness is the enemy of thoughtlessness.

The Blue Jay of Happiness ponders a saying from the sage Bodhidharma. “People who don’t see their nature and imagine they can practice thoughtlessness all the time are liars and fools.”

An eclectic guy who likes to observe the world around him and comment about those observations.
View all posts by swabby429 →
This entry was posted in Contemplation, Environment, Health, Hometown, Youth and tagged carelessness, disregard, mindfulness, neglect, rudeness, thoughtlessness. Bookmark the permalink.