Life has seemed to be much more chaotic than usual lately. To constructively deal with the additional stress, I decided it was time to spend some quality time and practice Ikebana once more.

The art-form is the deliberate use of mindfulness meditation and floral design. It has the look of modernity yet is rooted in tradition. To do Ikebana is to be mentally and spiritually engaged. 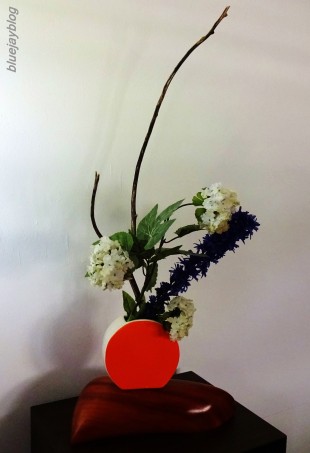 The first example is based on the old idea that lines are masculine and curves are feminine. It is coupled with another old concept that odd numbers are male and even numbers are female. In this case we have three linear elements and four circular elements.

If there is one theme the third Ikebana demonstrates, that would be freedom. I took three deep, mindful breaths, then began the process of placing elements and only placing elements.

The Blue Jay of Happiness quotes from Kadensho, Teshigahara’s Diary. “Just as musicians express themselves through the language of music, Ikebana artists must use the language of flowers.”

An eclectic guy who likes to observe the world around him and comment about those observations.
View all posts by swabby429 →
This entry was posted in art, Floral Arts, Hobbies, projects, religion and tagged Ikebana. Bookmark the permalink.