A portion of most of my Sunday afternoons is set aside for a weekly visit to the library. This is a really enjoyable way to begin a week. It’s also an integral part of my continuing education. The visits during this time slot began in 2010. Before then visits happened whenever a day off from work came up.

I’ll play the role of community advocate for a paragraph. The Norfolk Public Library is one of the best I’ve visited in Nebraska and elsewhere. In fact, its one of the main bragging rights our town promotes to businesses and people considering relocating to Norfolk, Nebraska. The emphasis on the library is due, in large part, to the importance of education in the community. In addition to our community college, we have a fairly progressive public schools system. Even the religion-based schools are large and prosperous for a town of only 24,000 people.

This spring, visits to the library began to become more interesting and less convenient at the same time. In April, the opening salvos of the major reconstruction of the library were fired. Old trees were felled outdoors. Indoors, staffers began consolidating and moving materials to the south half of the library building. 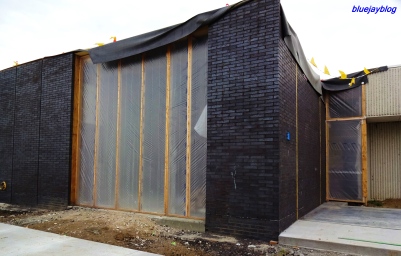 In May, workers built a temporary wall that divided the building in half. Then demolition began on the north side of the building so crews could pour foundation footings the next month.

This summer, I increased the number of library visits to include a working day. I wanted to keep track of the construction project as it happened. Because the addition will more than double the library space, this is a major project. Lots of activity and work are happening.

There is a deadline to meet, this month. All the materials and services are supposed to be moved into the new addition in November. That means the library will be closed most of that month. We regular patrons will be set adrift for at least three weeks. When we’re able to return, construction activity on the renovation of the old building starts. The fun part for us will be using the new addition for the first time.

After the old building has been redone, we patrons won’t be able to visit for awhile next spring. Some time during the summer the library materials and service areas will be configured for the entire building. I can hardly wait for the grand opening of the new library next summer.

The Blue Jay of Happiness likes this snippet from author Saul Bellow: “People can lose their lives in libraries. They ought to be warned.”

An eclectic guy who likes to observe the world around him and comment about those observations.
View all posts by swabby429 →
This entry was posted in Books, cultural highlights, Hometown and tagged construction, continuing education, libraries, Norfolk Nebraska, Norfolk Public Library. Bookmark the permalink.