The personal paper and emulsion snapshots we have tucked away in albums can be thought of as a type of folk art. Whether other people believe this is true or not, the pictures can certainly trigger memories of times and events that took place years ago.

The images bring to mind stories that aging folks like me often try the patience of younger people who are eager to take pictures of their own life events.

Nobody but a friend is going to care much that the picture of my HO scale train layout as a work in progress reminds me of the fun of building a tiny village on a plank of plywood. Nor will they care much that I bought the train after returning from Ohio and the side trip to a model train museum in 1988. However, the snapshot is interesting without the back story. 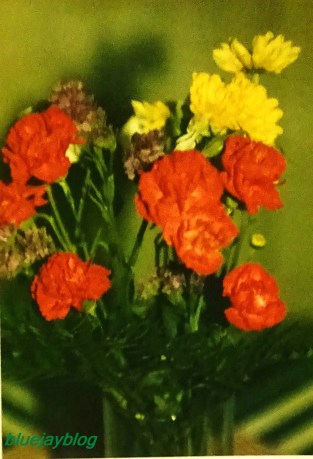 The photographs on this page were snapped with a Canon Sure Shot camera, unless specified otherwise–including the quick grab shot of the flowers from a pal on my 37th birthday. In fact, all these pictures were created back in 1989.

The Geodesic dome is in Vancouver, BC. The only camera I brought was a Fujifilm cardboard disposable loaded with 36 exposure print film. I didn’t want to hassle with my SLR or Sure Shot at the border. The trip was for pure enjoyment, only.

My radio station had an ad hoc lost and found drawer because our listeners sometimes dropped off items they had found. Most of the stuff were items like key-chains, gloves, eye glasses, and wallets. One of the items was a beat-up off brand camera loaded with film. It had been in the drawer for a couple of years, so I asked to claim it. There were a few frames left to expose, one of them is this picture of the mixing console in the main control room. This blurry snapshot brings back thousands of memories. 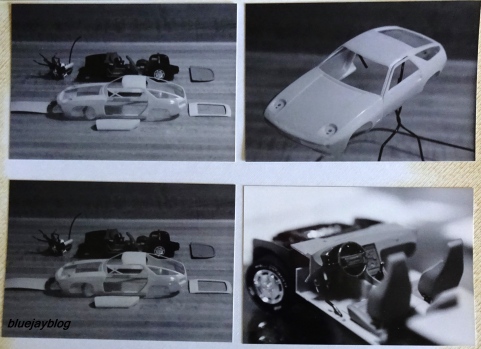 The album page records part of the building process of a model car kit. The project took up a couple of rainy autumn weekends. I bought 1/24th scale kit in order to see if I still could enjoy my childhood hobby of building model cars. The project was a lot of fun.

The finished Porsche 928 turned out very well. It was proudly displayed in the music room until I gave it to my brother.

I’m glad the old photo album was stored in an easily accessible place in the house. The snapshots brought back some excellent memories.

The Blue Jay of Happiness knows that a snapshot prevents a special time from escaping.

An eclectic guy who likes to observe the world around him and comment about those observations.
View all posts by swabby429 →
This entry was posted in art, cultural highlights, Hobbies, Hometown, Meanderings and tagged amateur photography, photography, snapshots. Bookmark the permalink.

2 Responses to Snapshots As Flashback Triggers