There’s a common truism that says we can have a happier life if we appreciate the things we already own. It’s easy to understand how this can be true. As societies we build libraries to enshrine the knowledge we possess, and museums to preserve the artifacts of our past.

I love to browse museums. While doing so, I try to imagine how the various things were used and what they looked like when their owners used them. This is probably a common practice among people who appreciate the importance of museums in our culture.

These were my ponderings yesterday while searching the basement for a tool that could help me remove the stubborn large lid from a jumbo size jar of peanuts. Then I thought, “Why not create some still-life compositions to photograph?”  These could be based on relatively modern artifacts that somehow relate to each other or show a peculiar juxtaposition to each other.

An old history book about the Bolshevik Revolution is the basis for a display of vintage Soviet artifacts and a troll doll. The blending of history and popular culture is strange until you understand how I got the Soviet artifacts.

After the collapse of the USSR, Barq’s Root Beer company purchased a large cache of Soviet paraphernalia. They offered small packets of the stuff as a commercial promotion. I took advantage of the hype and sent away for some.

A common aspect of the American lifestyle is the marketing of trivial products on television. That is the message of this teevee oriented still-life. Here we have micro-fiber sponges, a miniature camping/emergency lantern, a coffee mug and a pot of fake flowers that “dance” to the old song “In the Mood”.

Some of our stuff only relates to each other only because it was manufactured at around the same time period.

Finally, I wanted to create a still-life that displays artifacts as they are used for their intended purposes. 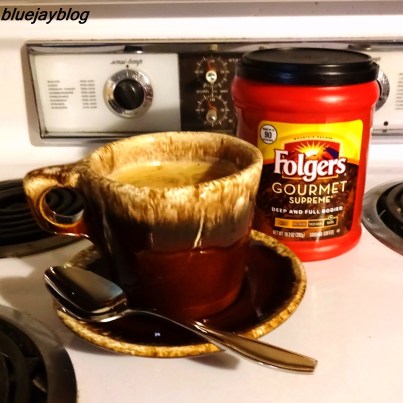 Oh yes, I eventually found the jar lid removal tool in the junk drawer in the kitchen. I can now enjoy some tasty peanuts thanks to a cheap, but clever modern artifact.

The Blue Jay of Happiness remembers this saying attributed to Lucius Annaeus Seneca: “It is not the man who has too little, but the man who craves more, who is poor.”

An eclectic guy who likes to observe the world around him and comment about those observations.
View all posts by swabby429 →
This entry was posted in art, cultural highlights, Gadgets, History, Hobbies, photography, projects, Vintage Collectables and tagged everyday objects, modern culture, still-life photographs. Bookmark the permalink.