Have you seen one of the videos about esteemed violinist Joshua Bell playing his $3,500,000 violin on a subway platform? Bell is one of the most famous violinists in the world. A few days before the experiment in the subway, he played to a sold-out concert hall where seats averaged $100 each.

Bell situated himself at a Washington D.C. metro stop one day in 2008. He performed six Bach pieces for around 45-minutes. It took three minutes before a middle aged gentleman slowed his walking pace, stopped for a few seconds, then resumed walking to keep up with his schedule. Four minutes into the “concert”, a woman tossed a dollar bill as a tip, but she didn’t bother to stop and enjoy the music.

The person who paid the most rapt attention was a three-year-old boy. His mother soon forced him to move along with her down the subway platform. Several other kids responded the same way, and all of their parents forced them away from the music. By the end of the performance just six people actually stopped for a few minutes to enjoy the Bach pieces. 20 commuters tipped Bell but kept walking without stopping. Altogether he earned $32. At the end of the “concert” there was no applause. People just went about their routines.

There are a lot of lessons the experiment provides. One of them is about respect.

We, in the West, would benefit from understanding and adopting an elegant gesture that is practiced in many Asian cultures. The simple, beautiful practice of the bow. This was something my step-mom who was born and raised in Thailand did. Tippy put her hands together at chest level, then did a short bow. She called her gesture “wai”.

Gestures of humility and respect for others are found in some form in many Asian cultures. The Japanese bow, gassho, is famous around the world. In Hindu nations, many people form the anjali mudra (palms together at chest level) to express namaste’. Basically, namaste’ means, “I bow to the divinity in you”. Lengthy essays and treatises have been written about namaste’; they can be summarized as writings about devotion and respect. 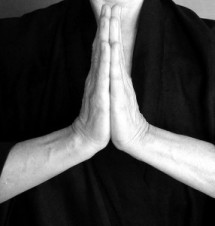 In the West, whatever our deepest feelings about spirituality may be, we can visualize bowing to others without actually, physically doing it so as not to draw undue attention or to be a poser. By visualizing ourselves bowing to others, we can recognize the importance of our fellow beings and our own humility. This internal gesture enables gratitude and respect for other people, the other creatures around us, and the environment that supports our very lives.

I still wish the practice of bowing could go mainstream in the United States. It would be a beautiful counter-balance to dampen our overt entitlement, exhibitionism, and self-promotion. In adopting the bow, we could put our egos in proper perspective, respect others, and enable authentic respect for ourselves.

By the way, the Joshua Bell experiment was repeated a few years later. This time, his performance was standing room only, he received hearty applause, and the respect he deserves.

The Blue Jay of Happiness takes this maxim from Albert Einstein to heart: “I speak to everyone in the same way, whether he is the garbage man or the president of the university.”

An eclectic guy who likes to observe the world around him and comment about those observations.
View all posts by swabby429 →
This entry was posted in Contemplation, cultural highlights, Friendship, Health, religion and tagged egoism, esteem, humility, namaste', respect, to bow. Bookmark the permalink.