I’m fortunate to live in a small Midwestern American city that allows its public servants to serve the citizens. This fact inspires and encourages city departments and concerned citizens to formulate, implement, and improve actual physical improvements to public infrastructure.

One of the major improvements many of us who live in Norfolk, Nebraska have been observing is the expansion of our public library.

The “old” library before the expansion project. (Thanks to City of Norfolk, Nebraska)

The “old” library was not some old decrepit building. It was a modern, pleasant place for people to check out books, do research, use the Internet, and have meetings. The problem is that city leaders wanted to keep our library relevant in this day and age of rapid obsolescence.

Voters approved a bond issue a few years ago to fund the project that would more than double the floor space of the present library. The library wouldn’t merely receive an add-on extension, it would be completely rebuilt, on the same site.

This had to take place while also continuing to serve the public as a library at the same time that construction takes place.

The main construction of building framing and enclosing of space was approximately half finished this month. The milder than usual winter weather aided workers and enabled some of the construction to be completed ahead of schedule. The “old” library’s exterior walls have been demolished and the former building’s foundations are now part of the framed-in south area of the new building. 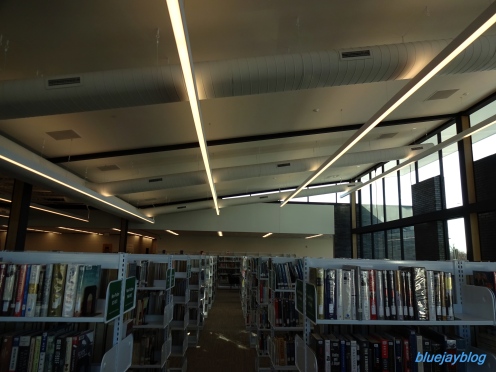 The most noteworthy architectural feature is the use of a slanting cantilevered roof on the northwest portion of the building.

Part of the new library has been opened to the public and is in use every day. The north area of the library features a cozy reading space, complete with a fireplace.

When it is completed, the new library will be more than just a library, it will be a relevant community center. The floor plan is designed for flexibility to enable future evolution of the library’s function and city’s needs.

The project is due to be completed this spring. Then after reconfiguration of the interior, the grand opening is scheduled for early in the summer.

The Blue Jay of Happiness quotes writer Ray Bradbury. “I couldn’t go to college, so I went to the library three days a week for ten-years.”

An eclectic guy who likes to observe the world around him and comment about those observations.
View all posts by swabby429 →
This entry was posted in Hometown and tagged community centeres, community infrastructure, media centers, public libraries. Bookmark the permalink.

2 Responses to Our Local Library’s Expansion