Rediscoveries From My Desk Drawer

It started with an old digital wrist watch. It was a pretty nice watch back in the 1990s when I wore the thing almost every single day.

Last Autumn, the battery was replaced because I wanted to start wearing it again sometimes. However, it didn’t fit anymore because my wrists are fatter than they used to be. The adjustments were maxed out, so I put it on a regular black leather strap. It doesn’t look right. It needs its original link bracelet.

The problem was finding the links I had removed from the bracelet back in the 1990s when the bracelet was too large. That’s when the hunt for the old spare links commenced. I thought I remembered stashing them in the desk drawer that serves as a miscellaneous file for stuff to deal with later. 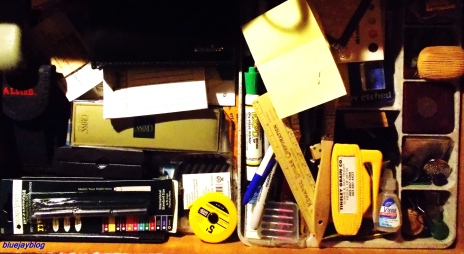 As far as desk junk drawers go, it’s somewhat organized. There is even a plastic divided junk drawer tray. That’s where I decided to search for the missing links. After all, I’ve been placing miscellaneous coins and doo dads in that tray to die of neglect for many years. I wondered why I hadn’t tackled this little job sooner. After all, the drawer is right in front of me every day.

There were hands full of tiny treasures to behold. Why not snap some pictures as reminders of the search? The little penlight is the keeper of a key-chain fob that step-mom Tippy brought back from Thailand as a gift for me. The geeky miniature slide-rule tie-bar that actually works was rediscovered. A large, heavy Norfolk High School medallion is there, I didn’t even attend that school. The oldest item is a war charm found in Arizona, or was it New Mexico? There’s an old token that Sears Roebuck issued to commemorate the refurbishing of the Statue of Liberty. 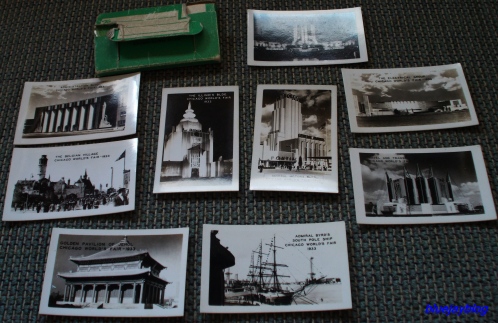 Best of all was the packet of miniature souvenir photos from the Chicago World’s Fair–how had I forgotten about that? They deserved to be examined again. 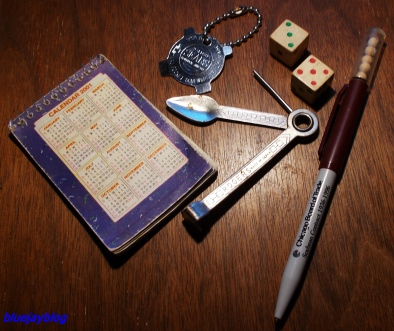 Of course there were many more little goodies like a pocket screwdriver that’s never been used, a pair of dice that has been used a lot, a novelty ballpoint pen that contains real soybeans. There’s a small folding tobacco pipe cleaning tool. Then there’s the small notebook I carried on my trip to India.

The old solar-powered calculator has been “lost” for many years. It still works as well as when it was brand new. There were a couple of old Kennedy half-dollars and a shiny silver dollar on top of it. I wonder if any of these things are super valuable. 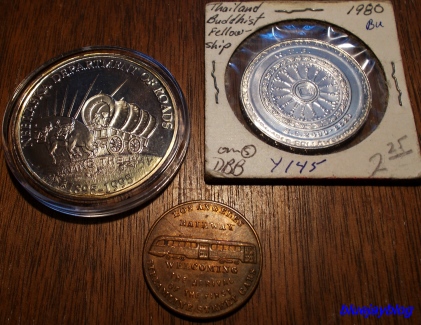 I used to collect commemorative medals and tokens. These rediscoveries are fascinating. There’s a Nebraska highway department centennial medallion, a Buddhist medal from Thailand, and an old commemorative token from Los Angeles.

The most amazing treasures from the desk drawer are three small Dutch coins. These were minted when the Netherlands were occupied by the Nazis during the Second World War. Two of them are from 1941 and the other from 1942.

Here are the obverse sides. 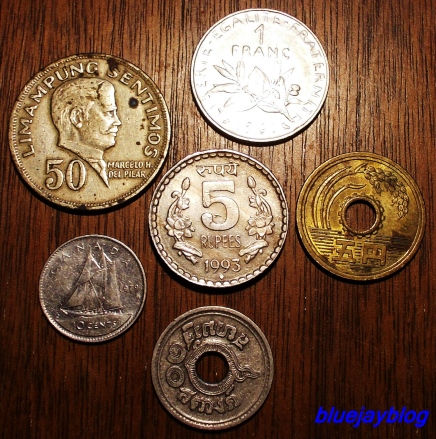 There was an overflowing handful of other coins that have very little individual value. A few of the more interesting examples include: a chewed up Filipino coin, a nice one Franc piece, a copper Chinese coin, the other coin with a hole from Thailand, a Canadian dime, and a five Rupees coin from India.

There are still more tiny treasures to sort through. None of them are the missing links for the watch. Oh well, the bracelet search will have to continue on eBay.

The Blue Jay of Happiness quotes industrial designer Marc Newson. “I have a lot of objects in my space, little things, reminders, memories.”

An eclectic guy who likes to observe the world around him and comment about those observations.
View all posts by swabby429 →
This entry was posted in cultural highlights, Gadgets, History, Hobbies, Hometown and tagged clutter, desk drawers, junk drawers, old coins, souvenirs. Bookmark the permalink.

3 Responses to Rediscoveries From My Desk Drawer