Just a few moments ago the furnace cycled off then a second later there was a “boom” noise. It was the sound of the sheet metal ductwork returning to its resting shape. Over the past few years, the combination of 60-year-old ducts and the much newer high-output furnace fan has

Now that the furnace has quieted down, more subtle noises are noticeable. The 100-plus-year-old house gives off a pop, a click, or a squeak at random times. When I listen more carefully, there are noises that are common during the warm months that are not noticeable during the snowy months. As I write this paragraph, the next door neighbor has started the engine of his old pickup truck. It’s idling, and I notice the owner has not yet replaced the worn-out muffler.

The pickup has been driven away. Now there is just the sound of the fan whirring in the laptop I’m using. I detect a distant hum coming from outdoors, and the slight ringing of tinnitus inside my head.

If we are blessed with the ability to hear, we experience the hundreds of different sounds that come our way each day. We might categorize them as ambient sound, music, or noise. This is a highly subjective practice we do. This is apparent in a verse from the poet William Blake:

“When the green woods laugh with the voice of joy,
And the dimpling stream runs laughing by;
When the air does laugh with our merry wit,
And the green hill laughs with the noise of it.”

His skillful use of language enables us to mentally hear what he once heard. We all use language in this manner when we tell about the roar of a jet plane, the rattling of a jack-hammer, or the chattering of a tree squirrel. There is also the mental noise of music that plays unbidden in the mind, such as the Wayne Newton song I wrote about in Sunday’s bluejayblog post.

Even though I have trouble escaping from “Danke Shoen”, I do enjoy going for a stroll outdoors on one of the area bike or hike trails. The physical noise of motor vehicle traffic, teevee or radio speakers, and other miscellaneous noise gets left behind in the town. Instead, I hear the screech of a hawk, the jeer-jeer of a blue jay, and the rustling of the breeze in the trees and meadows.

Some of the oddest noises can be heard in the soundtracks of animated cartoon programs. The various bloops, whistles, and crashes help bring the characters’ actions alive. I remember the rapid fire bongo drums when the cartoon animal “winds up” to begin running away from his 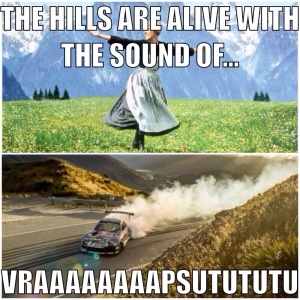 adversary. Then there’s the “pew” sound-effect of a rifle to indicate the chase has begun.  Sometime soon, find a favorite cartoon clip on teevee or YouTube then close your eyes and only listen to the soundtrack.

Libraries have a unique relationship with noise. We are urged to be quiet inside of them. This rule only makes noises more noticeable there. We can hear patrons coughing, sneezing, carefully whispering, and the footsteps of children running on the carpet. In the media center, there are the muffled sounds of the computer users playing video games or listening to music through earbuds.

In as much as I love to be aware of sounds and describe the various noises in our world, I prefer to take refuge in solitude, and silence. Sometimes it’s also good to share the quietude with a few sincere friends.

The Blue Jay of Happiness quotes his favorite composer/musician Jean-Michel Jarre. “The difference between noise and music is in what the musician does with the sounds.”

An eclectic guy who likes to observe the world around him and comment about those observations.
View all posts by swabby429 →
This entry was posted in Environment, Hometown, Meanderings, music, Wildlife and tagged hearing, listening, music, noise, sound. Bookmark the permalink.