The democratic process is on many people’s minds these days. In some countries, like the United States, it has been on many of our minds almost constantly since 2016. It seems like democracy, itself, and the institutions that keep watch are under siege internally and externally. The late US Senator John McCain said:

I’ve been a media worker for most of my life and have seen the messenger get shot at for as long as I can remember. I’m not a fan of “press release” journalism because such a state of “reporting” is nothing better than a state controlled media. People who love getting to the 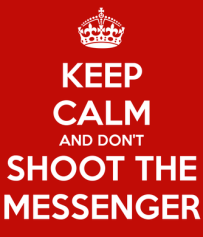 American journalists understand the importance the founding fathers placed on a free, unhindered press by including this right in the First Amendment to the Constitution. They understood, first-hand, the vital dangers official censorship and self-censorship represent to the democratic process.

I once worked for a company that relied upon official statements as a shortcut to news writing and reporting. There was no obvious ulterior motive for this, that I could see. It was a matter of economics for the small radio station because the company didn’t have the financial means to pay competent, professional reporters. Newscasts were assembled and delivered by regular disc jockeys and sales persons.

The only competent journalism available at many small-market radio stations comes from the national and state wire services. We generally trust the Associated Press, on faith, that their reporting is accurate and objective. Regarding statements from city and regional sources, those of us who care about accuracy remain skeptical of the provided information from officialdom and wire services. Good reporting requires open-eyed discernment.

In order to maintain friendly relations with the town and police administrations, the station management mandated that local stories be re-writes of press releases. As far as we staffers knew, this rule was a purely economic decision. Yet, it remained a necessary evil. That news policy was one reason I quit that job and moved on to a larger, more ethically responsible company. That company continues to generate news stories by consulting multiple, often conflicting, sources.

The other institution that is under sustained widespread attack these days is education. Kofi Annan stated, “Education is a human right with immense power to transform. On its foundation, rest the cornerstones of freedom, democracy, and sustainable human development.” The former UN Secretary General wasn’t the first person nor the last to recognize the vital importance of education to democracy and humankind.

Even though countries like the United States, Mexico, and Canada are democratic republics, it is proper to refer to them by the shorthand term “democracies”. Ideally, the will of the citizenry is the main influence in the governing of the nation.

Due to the sheer size of the country and the various personal interests of the people, we do not get everything we want nor prohibit everything we want to prohibit. It is this complexity and the resulting conflicting opinions about the federal system that makes the press and comprehensive education so very important.

How can we have informed voting without understanding the structure of government and the implications of the issues and candidates we choose, without a free press and access to all information? The answer is, we cannot. Tight control over the media and the education system are the hallmarks of undemocratic leadership.

If we are to prevent tyranny from either foreign powers or the tyranny of the majority, it is important to keep Franklin D. Roosevelt’s wise words in mind. He wrote, “Let us never forget that government is ourselves and not an alien power over us. The ultimate rulers of our democracy are not a President and senators and congressmen and government officials, but the voters of this country.”

I hope you observe and celebrate International Day of Democracy today because democracy is under concerted attack at home and abroad. It is up to us to keep democracy alive and healthy.

The Blue Jay of Happiness quotes  the late US Supreme Court Justice Thurgood Marshall. “Where you see wrong or inequality or injustice, speak out, because this is your country. This is your democracy. Make it. Protect it. Pass it on.”

An eclectic guy who likes to observe the world around him and comment about those observations.
View all posts by swabby429 →
This entry was posted in Controversy, cultural highlights, Hometown, Politics and tagged democracy, democratic republics, tyranny, tyranny of the majority. Bookmark the permalink.