With Liberty And Justice For All

Near the end of one of my trips back to San Francisco, I purchased a small campaign-style pin at a book store on Castro Street. The simple, inexpensive souvenir became a precious, almost holy artifact from the time I bought it. I keep the thing in my little tin box of special trinkets. 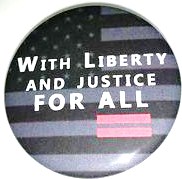 Yesterday, while looking for something else, I stumbled upon the pin. The sight of it brought about fond memories of my years in the Bay Area. Those were years that brought me out of my shell and allowed me to manifest my most idealistic side. The small pin’s message is clear and simple. “With Liberty And Justice FOR ALL” Even though I bought the pin in San Francisco’s gay neighborhood, I always thought the message is intended to include every person in the country.

Of course the phrase, “with liberty and justice for all.” are the closing words of the Pledge of Allegiance. They have been an inspiration for Americans ever since the Reverend Francis Bellamy originally published the Pledge in 1892. It’s beautiful, stirring, and to the point.

“I pledge allegiance to my Flag and the Republic for which it stands, one nation, indivisible, with liberty and justice for all.”

So I leaned back in the easy chair and pondered the little tin pin and its reference to one of the country’s most sacred creeds. 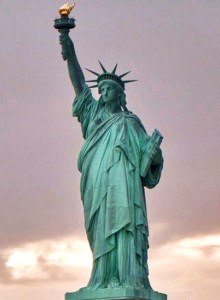 It’s so easy to mouth the words to the pledge, we do it by rote when we are called upon to repeat it. Yet many of us believe it applies only to certain people who are just like us and no others. My little pin is special in that the words, “FOR ALL” are in all caps. The ideals of liberty and justice apply to everybody, not just certain social categories, religious affiliations, political opinions, ethnic groups, sexualities, and so on.

I pinned the little artifact onto my left shirt pocket, appropriately over my heart; and thought about the message further.

I have respect for the people who have fought for the country in the armed services and the civil rights struggles throughout the years. Some of them were schoolmates, some of them were family. One of my cousins retired from the US Navy this past summer. I am privileged to have friends and relatives from all branches of the military. I am humbled by the people I’ve known who have volunteered in service to various civil and human rights struggles. Somewhere in all of their hearts was the ideal of liberty and justice for all.

That said, liberty is more than some words we repeat when saluting a flag. Liberty is more than campaign slogans in the service of getting politicians elected to positions of power. Too often the flag, the Pledge, and Liberty are used as weapons to bludgeon political opponents and people who lack power and influence. Liberty is not permission to hurt other people nor to force them to conform to certain “values”. When liberty is used to promote discrimination, liberty becomes defaced and polluted.

My personal philosophy can be summed up in three words, equality, fraternity, liberty. Those three words have inspired my life. 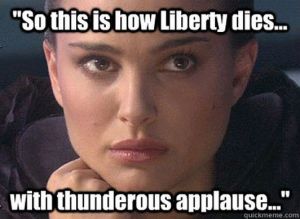 There are retrograde forces hard at work to limit freedom, justice, and liberty for all. They aren’t being sneaky about doing it either. They’re proudly shredding the spirit of the Constitution with enthusiastic approval of some of the public. There is even an influential faction that is openly calling for the Constitution to be rewritten, to their advantage, of course. It is tragic that our nation’s ideals could be set aside for political and religious privilege.

Our culture is comprised of people from all parts of the world. We are a collection of many subcultures. We have somehow managed to get through civil strife and argumentativeness for over two centuries as a nation. Through compromise and diplomacy we have managed to exist. The nation that genuinely values liberty and justice FOR ALL, will be a nation that has a long and healthy life.

The Blue Jay of Happiness quotes W.E.B. DuBois. “The cost of liberty is less than the price of repression.”

An eclectic guy who likes to observe the world around him and comment about those observations.
View all posts by swabby429 →
This entry was posted in Contemplation, Controversy, History, Politics, religion and tagged Francis Bellamy, human rights, justice, liberty, Pledge of Allegiance, San Francisco, US Constitution. Bookmark the permalink.