Back in the mid-1980s my friend Doug and I once rented nuns’ habits from a costume supply company in order to attend a radio station sponsored Halloween masquerade party at one of the local hotel convention halls. Our mutual pal, Sean, was handy with fabric and sewing machines. He decided to create his own flashy Pope costume.

Doug and I had been inspired by the Sisters of Perpetual Indulgence, Sean was simply being his own highly creative self.

At the party, we fit in perfectly with the crowd made up of creative folks with everyone’s minds set on enjoying a fun night. If memory serves me right, among the party-goers were more “nuns” and a few priests. Some of them were Roman Catholics and nobody was offended. The evening was a spooktacular success for everyone involved. That Halloween night is one of my favorite memories.

Because I don’t think of myself as a superstitious person, Halloween has always been more about creativity and letting go, than anything else. The holiday is one of our society’s rare opportunities to really let our hair down.

One of my personal Halloween traditions is to add some inexpensive, small special touches to the house. This year I will install one of those color changing LED bulbs into the front porch light socket. Another one of those bulbs will be in a living room lamp. On the stereo, I’ll loop a recording of J.S. Bach’s “Toccata and Fugue in D minor” played by Gert van Hoef. I don’t have a costume, per se. Instead I’ll dress up in a nice suit and wear my dragon themed necktie. 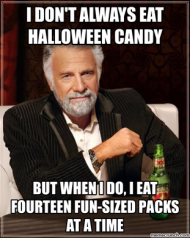 A few young families have moved into the neighborhood this year, I’m eager to see how they have costumed the children. How many dainty fairies and Frankenstein’s monsters will I see tonight? Will some of the college students from the four-plexes next door arrive, sans costumes, to beg for some treats? If the college kids don’t show up tonight, I’ll give them the leftover candy tomorrow because I cannot eat many sweets.

I wish more grownups would dress up for Halloween. By putting on costumes, they could let out their secret selves and shine for an evening.

The Blue Jay of Happiness quotes actress/comedian Mindy Kaling. “I would love if gay men responded to me. All I want is for many gay men to dress up as me for Halloween.”

An eclectic guy who likes to observe the world around him and comment about those observations.
View all posts by swabby429 →
This entry was posted in cultural highlights, Entertainment, Friendship, Hometown, Youth and tagged Halloween, holidays, masquerade parties. Bookmark the permalink.