Earlier this month fog shrouded much of Northeast Nebraska. The first time I noticed it was around 3:30 in the morning. At that time it was unremarkably light. The next time I looked out the window, at 5:00, visibility was less than a quarter-of-a-mile.

At 5:30 the fog was somewhat more dense. It was time to bring out the camera and snap a few shots from the viewpoint of my driveway. Because the air temperature was below freezing and the relative humidity was nearly 100-percent, I expected a fair amount of hoarfrost formation to occur.

At 7:30, I was itching to take a walk with the camera down the Riverfront Trail in order to capture the fairytale scene of the hoarfrost covered town. A few hundred yards from my house, the parking lot lights of a supermarket glimmered through the trees almost as a finishing touch to the scene. 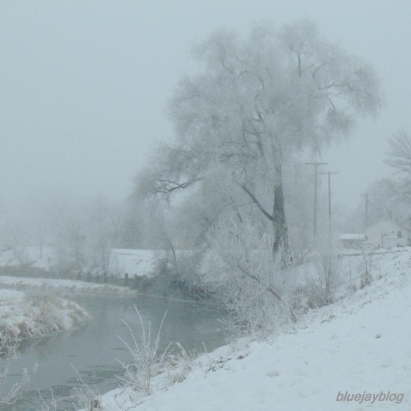 I took dozens of frames of the area near the river. The hardest task has been to cull only a few to use for the Christmas Day blog post.

In my haste to take the short hike, I’d forgotten to wear gloves. The brisk air caused my fingertips to sting. I needed to return home. On the way, this scene of the new downtown bridge presented itself for admiration.

Arrow traffic signs appeal to me. In this case, one is framed in crystalline beauty.

By noon, the sky had completely cleared. The contrasting blue sky provided a striking backdrop for the frosty trees in my front yard.

The close-up shows hoarfrost beginning to blow off of a bush as a southerly breeze picked up speed.

I hope these images communicate wonder and joy for a beautiful, meaningful holiday.

The Blue Jay of Happiness quotes 19th century writer/satirist Robert S. Hichens. “It was a black and white day of frost, which crawled along the dark trees and outlined twig and branch. The air was misty, and distant objects assumed a mysterious importance. Slight sounds, too, suggested infinite activities to the mind.”

An eclectic guy who likes to observe the world around him and comment about those observations.
View all posts by swabby429 →
This entry was posted in art, Hometown, photography and tagged fog, hoarfrost, Norfolk Nebraska, winter holidays, winter scenery, winter weather. Bookmark the permalink.

4 Responses to The Hoarfrost Appeared