We’re not even one complete week into 2019 and already, we have a second holiday to celebrate. Today is Blue Monday, the first Monday after New Year’s Day. A public relations company (of course) planned the first Blue Monday for 2005. 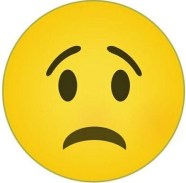 I select the first Monday of January because I like to get this unpleasant business out of the way so I don’t have to think about it anymore. This is the same reasoning I have when preferring a dentist appointment early in the day instead of later.

Coincidentally, my first dental check-up of the year has been scheduled for this morning. The timing of the dentist appointment was not done on purpose, it was simply a matter of selecting the first day available by the hygienist. I don’t expect that any problems will be found, so when the teeth cleaning is finished, the rest of Blue Monday should be less unpleasant. 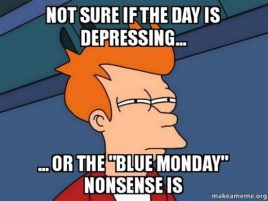 So, what is Blue Monday and why is noteworthy? Here is that “formula” I alluded to earlier: Winter weather conditions plus indebtedness level plus elapsed time since the end of the Holidays plus thoughts about our New Year’s resolutions minus low levels of motivation minus feelings of powerlessness added to the fact that it is a Monday multiplied by anything that can be unpleasant.

Blue Monday is a reminder that there are a whole year’s worth of weekends that will end and there will be a corresponding number of Mondays to endure.

Mondays are the outcasts of days of the week. Have they always suffered pariah status? I don’t know for sure, but I’m guessing Mondays started getting a bad rap at the beginning of the Industrial Revolution when workers had to return to their strenuous jobs after a day or two away.

For most of human history, people usually had only one “day of rest”. In the west, that day off for Jewish people was observed on Saturdays, Christians had Sundays, Muslims on Fridays. There were exceptions, of course.

As the west became more industrialized, the workers resented having to toil long hours, seven days per week. They became more and more angry about not having enough time for their domestic chores at home and the severe lack of time to spend with their families. This dissatisfaction eventually morphed into labor strikes and labor unions. There is a long, fascinating history about the struggles between workers and industrialists that is worth exploring.

Anyway, thanks to the persistence and sacrifices of employees, factory workers eventually obtained the five-day work week. In addition, Henry Ford adopted the weekend idea before the government did. Ford reasoned that it is a good idea to give his employees a two day weekend.

According to the Ford Motor Company, Mr. Ford figured out that his own laborers could be good customers, too. If the company wished to sell more of their product, the employees needed time off of work in order to use and enjoy them. So, people who work a five-day workweek can thank labor unions and Henry Ford–who recognized that having a couple of days away from work is a win-win proposition for labor and management. Therefore, we have weekends and Mondays.

Now we have flexible schedules. That means not everybody has Saturday and Sunday off of work. This means some people’s “weekends” fall sometime during the middle of the week and they return to work sometime later in the week. For some workers, their “Monday” is on Saturday. 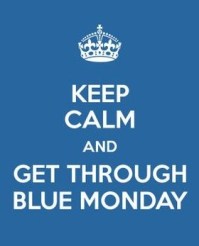 I used to have Fridays and some Saturdays off the clock; then I returned to work each Sunday. So Sundays were, in effect, my Mondays. So actual Mondays were no big deal, my Mondays were more like everyone else’s Tuesdays.

Now that I’m retired, Mondays are only noteworthy because many of my friends still work. They still only have weekends for socializing. Monday is back to work day for them. That means my Mondays are vestigial things like my appendix. The same notion holds true for Blue Monday. It’s just a remnant of the past.

We spend one-seventh of our lives on Mondays. That’s a big share, so why not enjoy Mondays? When thinking about today’s iffy economy, we can think more positively about Mondays. Workers don’t have to work, they have the privilege to work. There are a lot of people who don’t have jobs these days.

So, Mondays, like the other days of the week, are a mixed bag.

Have a happy Blue Monday.

The Blue Jay of Happiness enjoys this little verse from the Presbyterian theologian A.A. Hodge:
“On Monday, when the Sun is hot,
I wonder to myself a lot.
Now is it true, or is it not,
that what is which and which is what?”

An eclectic guy who likes to observe the world around him and comment about those observations.
View all posts by swabby429 →
This entry was posted in cultural highlights, History, Meanderings and tagged Blue Monday, Henry Ford, industrial revolution, Labor Unions, Mondays, play, weekends, work. Bookmark the permalink.