While assembling the second project for today’s post, the dictionary definition of the word “unorthodox” came to mind: a person or practice that goes against traditions of a particular belief or way of doing things. The unorthodoxy in this case is the radical departure from the established rules of Ikebana, the Japanese discipline of flower arranging.

When all three of the projects were complete, I realized all of them violate “accepted” standards of floral design. Perhaps most of my past projects have also been unorthodox in some ways. 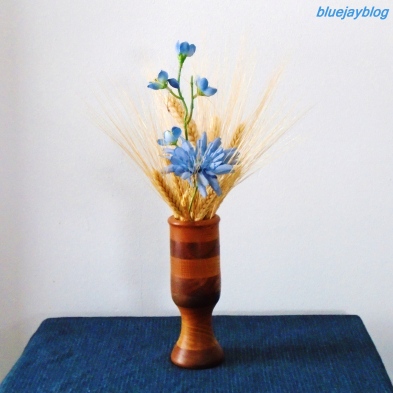 A small turned vessel constructed from rich woods is soothing to the senses. The faux blue blooms framed by real blades of wheat push the envelope. 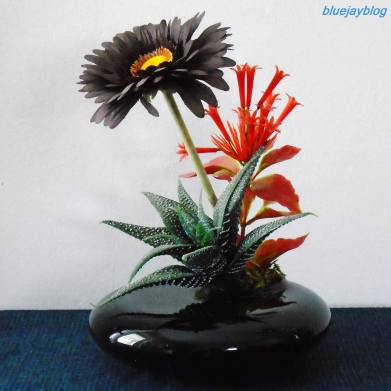 The unorthodox Ikebana project’s signature element is the pointy succulent plant. There are only two other elements–the cluster of trumpet flowers and the Gerbera daisy. The three are nestled in a vintage, American made Ikebana vase. 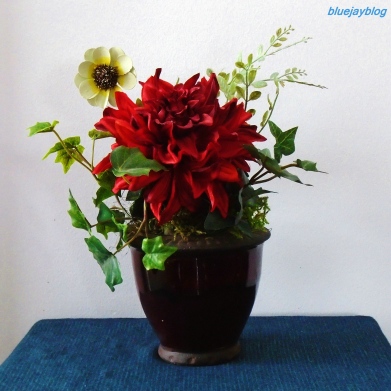 The Blue Jay of Happiness quotes journalist, biographer Howard Sounes. “Bob Dylan at 60 [is] the same as Bob Dylan at 16. He’s a loner, … He’s secretive. He’s a man who’s very funny, witty and playful, and at the same time he’s very serious and traditional. And at the same time he has this flare for being unorthodox and iconoclastic and wayward. But he always was.”

An eclectic guy who likes to observe the world around him and comment about those observations.
View all posts by swabby429 →
This entry was posted in Floral Arts, Hobbies, projects and tagged Ikebana, traditional, unorthodox, untraditional. Bookmark the permalink.