When my old boss promoted me to Public Affairs Director for the radio stations, it was an unexpected development. The job was not one that I had pursued. I was more than happy being the music director. At first, the position seemed daunting and quite challenging. 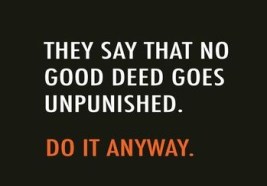 After a few months, the job not only felt right, it was more rewarding than I had anticipated. Aside from sorting out who and which organizations were worthy of getting free airtime on the stations, I met some amazingly humble people with hearts of gold.

The spokespersons and representatives came from all walks of life, various creeds, and harbored various political opinions. The aspect that connected them all was their drive to perform good deeds. I frequently pondered the community leaders and the representatives of groups that came to me to help with their worthy causes. How amazing it must be for them to help humanity and the world as their careers.

Most of the representatives were out to do good deeds, but I did encounter several who qualified as do-gooders. It was easy to tell the two categories apart. The good deed doers wanted to empower people who had no voices in the public sphere. The do-gooders strove to convert people to their ways of thinking.

“We would frequently be ashamed of our good deeds if people saw all of the motives that produced them.”–François de La Rochefoucauld

The good-doers were easy to love and their causes seemed more legitimate, necessary, and truly helpful. The do-gooders seemed to have ulterior motives and appeared to be doing good as ways to promote themselves and their political or religious agendas. It was easy to give airtime to the good-doers. Sometimes, the boss strongly suggested that I give away time to some specific do-gooders. The promotion of do-gooders was the price of admission. All things considered, the good-doers received the lion’s share of the free time.

The gift of free airtime included public service announcements, psa’s, during many regular commercial breaks throughout the day and night. In some cases, I invited representatives and spokespersons to appear on my daily interview show. This gave the good-doers some time in the limelight. These interviews revealed helpful information about the organizations and the people involved in them. This enabled the interview program’s listeners to become familiar with the worthy causes.

A take-away from meeting these kind, well-intentioned people is that helping others is a basic, simple vision that most folks have. Nearly everyone wants to connect and contribute to worthy purposes. In giving out free airtime to groups, more people were able to contribute to helping people and causes most in need. This revealed what public service really is–empowering the public to serve others.

Thus, the act of performing a good deed can be a delicate balancing act.

An eclectic guy who likes to observe the world around him and comment about those observations.
View all posts by swabby429 →
This entry was posted in cultural highlights, Hometown, Meanderings and tagged charity, good deeds, public service. Bookmark the permalink.