A Few Thoughts About Democracy

No, the United States is not the world’s largest democracy. That honor goes to India. This makes sense by virtue of population size. Strictly speaking, there actually no purely democratic nations. The U.S. India, and most of the non-dictatorial nations are governed as democratic republics.

Some historians say that the closest a major civilization has come to pure democracy was the ancient city-state of Athens. It’s basically inaccurate to call ancient Greece a democracy, because much of that area was not governed by democratic means. For example, Sparta was basically run as a military dictatorship.

Meantime North American democratic republics in Canada, the United States, and Mexico have checkered histories. Not only has suffrage not always been universal, there was massive discrimination against the aboriginal peoples. There was also the presence of the slavery of African origin and native peoples. After the abolition of slavery in the United States, African Americans and Native Americans were still forced to live with legal forms of discrimination for at least another century.

We should also remember that in most of the World, women were barred from voting and participating in democratic democracies. The women’s suffrage struggles eventually changed this major shortcoming. For instance, in the “birthplace of democracy”–modern Greek women had to wait until 1952 for universal suffrage.

In North America. Canadian women obtained the right to vote at different times depending upon the jurisdictions. In most Provinces, women could vote by 1919. In Prince Edward Island, they had to wait until 1922. Women in Newfoundland couldn’t vote until 1925. Meantime Quebec finally allowed women the vote in 1940. Women in Mexico were not legally able to vote until 1953. In the United States, universal women’s suffrage finally became reality in 1920.

Meantime, in India, men and women had the same voting status in the British Raj by 1935. Due to India’s relatively recent status as an independent nation, the evolution of India as a democratic republic is still robust and ongoing.

Roughly speaking, “democracy” around the world began taking hold in the 19th and 20th centuries. Much of the development took place after the first World War. The changes went on hiatus during the Second World War, then resumed in earnest following the end of those hostilities.

A major problem with democratic republican forms of government is maintaining them. Democratic republics are quite fragile. Voters eventually take participation for granted. Special interests and commercial interests take advantage of the slack. At that point, a democracy is one in name only. There is the ever-present danger of a democratic republic falling under the tyrannies of oligarchy, plutocracy, and theocracy. The presence of fragmented societies in the U.S. and elsewhere increase the dangers of undemocratic power.

“Integrity is the lifeblood of democracy. Deceit is a poison in its veins.”–Edward Kennedy

Perhaps the most insidious problem in today’s “democracies” is that of dishonest politicians manipulating the voters. What “they” want us to see is rarely what we get. When the truth becomes endangered the 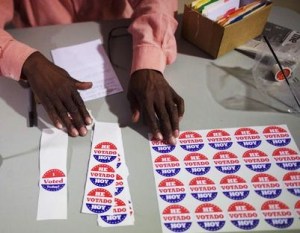 Plato’s truism should be taken as a constant threat. “Tyranny naturally arises out of democracy.” We are wise when we are reluctant to follow the winds of populism and fear. Open, thoughtful minds most often lead to freedom and liberty for all.

The Blue Jay of Happiness quotes writer George Orwell. “It is almost universally felt that when we call a country democratic we are praising it; consequently, the defenders of every kind of regime claim that it is a democracy, and fear that they might have to stop using the word if it were tied down to any one meaning.”

An eclectic guy who likes to observe the world around him and comment about those observations.
View all posts by swabby429 →
This entry was posted in Controversy, History, Politics and tagged democracy, democratic republics, slavery, tyranny, women's suffrage. Bookmark the permalink.