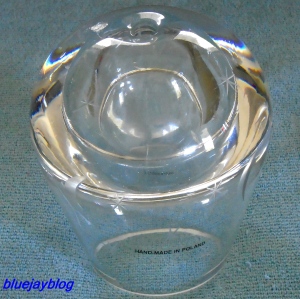 I had nearly finished browsing the bric a brac at the Goodwill Store yesterday when I noticed the peculiar but beautiful piece of art glass. I didn’t know what it is nor how it would be used, so I showed it to my friend Shelly. She examined the heavy artifact from several angles then admitted she had no idea what it is.

So I bought it because one of the fun things about thrift stores is stumbling across peculiar items that seem to have no purpose other than to cause people to wonder what they are and do. I’m tempted too often to buy them because they’re very cheap and my curiosity is intense.

In the case of the glass object, I brought it home to see if the “Object Recognition” app on my phone could identify it. The first scan told me that it is a car stereo. I placed the object on a different surface and tried again. The app told me that it’s a glass container. The app has never been helpful, so I plan to uninstall it later.

The hole compounds the mystery. Why is there a hole? Is it just left over from the process of glass-blowing?

The next option was to use Google Images. It came up with several dozen pictures of beautiful Polish art glass pieces. After using different search criteria, I still couldn’t find an exact match. Just as my patience waned, I happened upon a picture of a very similar object to my piece. It is a hand-blown vase. With that information, it’s easy to see that the art glass from Goodwill should indeed be a vase. However,  is the case closed? Has the mystery been solved?

A few weeks ago, I encountered a red silicone ring that measures just over 3-inches in diameter and has a small swivel handle on the edge. A quick search on the Web revealed that it is a kitchen gadget that can be placed onto a skillet. It is used to prepare circle-shaped fried eggs. It can also be used to prepare small pancakes. Now that I know what it is, I’ve been having fun preparing fried eggs.

Last autumn, I encountered a non-stick skillet that has open slots on its bottom. The manager of the Goodwill Store had no clue, nor did anyone else. I passed it up but promised that if it was still on the shelf a couple of days later, I’d buy it. Two days later, it hadn’t been moved, so I spent two-dollars and brought it home. After half-an-hour of homework, I discovered that it is a cooking utensil intended for use on barbecue grills. I watched a YouTube video of an outdoor chef preparing roasted vegetables using a skillet exactly like mine. He said that the pan can also be used for roasting chestnuts on an open fire.

There are a few items that are so far still unidentified. The biggest one is an aluminum cylinder that is ringed with numerous heat-sink fins. It’s obviously some sort of industrial artifact that was designed to contain another artifact that produces a great amount of heat. I still don’t know what it is, but I now use it as a planter. Presently, it contains an arrangement of large tropical greenery and flowers. 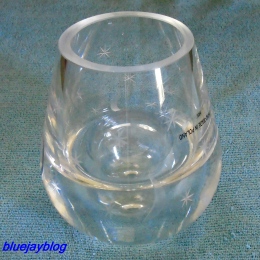 Is this really only a vase?

Of course there are other mundane mysteries that are not found in thrift stores. They’re too big or too messy to bring home. I’m sure that if I knew what they’re used for or who manufactured them, their mysteriousness would vanish.

Then there are the ultimate enigmas. People we meet and know each day. Each acquaintance and friend is a mystery to us. You and me are riddles to everybody else and to ourselves. We are the constant mysteries of our lives. It’s often through the mundane business of daily living that we stumble across pieces of the puzzle of life.

The Blue Jay of Happiness quotes Oscar Wilde. “The true mystery of the world is the visible, not the invisible.”

An eclectic guy who likes to observe the world around him and comment about those observations.
View all posts by swabby429 →
This entry was posted in cultural highlights, Gadgets, Hometown, Meanderings, philosophy, Vintage Collectables and tagged curiosity, enigma, material stuff, mystery, puzzlement. Bookmark the permalink.