I saw it before I heard it. The mosquito hovered over my hand after I switched on the bedside table lamp. It’s unpleasant to discover mosquitoes nearby, but it is especially frustrating at bedtime. I was especially sleepy and was in no mood to deal with the little bloodsucker. 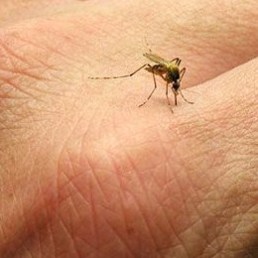 The famous, often quoted proverb about influence came to mind. “If you think you’re too small to make a difference, try sleeping with a mosquito.” The Dalai Lama is one of many people credited with this or a slight variation of it.

I walked back to the living room in an attempt to lure her out of the bedroom. I glanced at the sofa, considering whether or not that might be a better place to sleep. A few moments later, the little insect appeared and I was able to dispatch her to parasite heaven.

We’ve had an especially wet spring with frequent thundershowers and storms. That means there are plenty of stagnant puddles and pools in the neighborhood where mosquitoes breed and flourish. The tiny insects swarm around the shaded exterior walls of the house and garage, so it’s difficult to avoid them. I need to be much more mindful of entering the house so as to not allow them to sneak inside. Yet, one or two manage to come in with me each time. 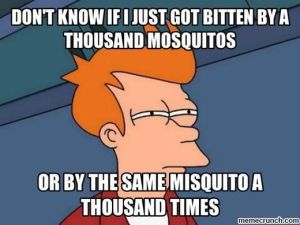 Besides other human beings, it turns out that mosquitoes are our most deadly adversaries. Malaria and other mosquito-spread diseases kill hundreds of thousands of people each year and more than 200,000,000 of us are negatively affected by them.

According to the Bill and Melinda Gates Foundation, on average, sharks kill ten people each year, lions take out 100 of us, crocodiles about 1,000. Second place to mosquitoes are fellow human beings. We wipe out an average 475,000 of ourselves through murders and wars. That figure does not include accidental deaths.

The Gates Foundation says there are over 2,500 species of mosquitoes. The little creatures live everywhere on Earth except for Antarctica. Lately, it seems like half of them are here in Nebraska.

“A group of scientists wanted to find the most effective mosquito repellents. So they tested 10 different substances, including camp-out standbys like DEET, as well as a random choice: Victoria’s Secret perfume ‘Bombshell’. Turns out the perfume is almost as good as DEET.”–Annalee Newitz

I have no experience with the Victoria’s Secret perfume. On the other hand, I’ve tried many popular repellents. The only product that is not marketed as an insect repellent that works reasonably well is Avon’s “Skin So Soft”. I liberally apply it before doing chores outdoors.

The best way to avoid swarms of mosquitoes is to stay indoors. That’s my plan for today.

The Blue Jay of Happiness quotes the fascist tyrant Benito Mussolini. “The best blood will, at some time, get into a fool or a mosquito.”

An eclectic guy who likes to observe the world around him and comment about those observations.
View all posts by swabby429 →
This entry was posted in cultural highlights, Health, Hometown, Science, Wildlife and tagged disease, mosquitoes, pest control, sleep. Bookmark the permalink.