My friend Jorge sent an email earlier this week with a topic idea for this blog. Because we think alike regarding such subject matter as civil liberties and the significance of historical events, he thought I should look into the “National Day of Lament”. He was correct in believing I might be interested in such a day. After all, there are many lamentable things that people think about. Some of these are personal, others of social, and others caused seismic shifts in history. 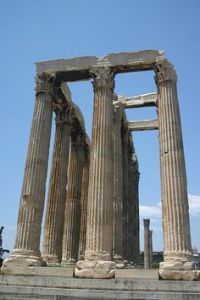 I followed up on Jorge’s suggestion and found mention of the commemoration by a group or individual called “Rational Hedonism”. I read a compelling article at the site about the destruction of Classical Wisdom traditions that was initiated by the Eastern Roman Emperor Theodosius at the Council of Constantinople.

A massive wave of intolerance swept through the territories and mobs feverishly trampled forth as a popular blitzkrieg of vandalism, mayhem, and murder. Philosophical teachers were tortured and killed, important books were burned and lost forever, temples and art were vandalized or destroyed completely.

Knowledge that took centuries to acquire in science, medicine, the arts, and inventions was obliterated during this fit of reactionary violence. The official Roman decree that the Empire was to be a Christian theocracy caused a chain reaction of official and random ruin of the millennium and a half of advancements in philosophy, art, literature, scientific knowledge, medical discoveries, and other important areas.

The overwhelming cultural mayhem resulted in setbacks and retrograde attitudes that influenced western civilization up to and including the present day. It has taken centuries for humanity to recoup the losses. In many instances, we have yet to recover lost ideas and advancements of the Classical Era. Of course much literature and art was obliterated and can never be recreated. We only have small bits and pieces of those artifacts.

The overall losses retarded social progress to a nearly inestimable degree. We are left to wonder what our present society and culture might be like if the wholesale destruction of ancient wisdom had not happened. The possibilities for authors of alternate histories seem endless. In a nutshell, these are the sorrows to acknowledge today, the unofficial National Day of Lament.

Jorge expressed deep concern that this history may be repeating itself. He worries about the rollback of civil rights protections for minority-status peoples. There are the loud voices that advocate the blending of religion and government. Most troubling are the politicians who swore the oath to preserve and protect the U.S. Constitution who now say it should be re-drafted or even abolished. Jorge says it would be a grave mistake for us to glibly overlook and deny these grave dangers to the American way of life.

Superficially, a day of lamenting seems to be a negative event. On the contrary, it is through remembering the destructive events of the past and the potential that was lost that we are able to steer past the clear and present dangers of the here and now. We need to remember the sordid historical mistakes and not allow ourselves to repeat them. Just because humanity has a very poor record of heeding history, doesn’t mean we must still allow our civilization to stumble and fall again.

I hope we will have a deep and meaningful Day of Lament that will extend beyond only one day. Can we halt the rollback of the hard-won benefits of the modern world? We are in greater danger than we know.

The Blue Jay of Happiness ponders something from the renowned British poet, Alice Oswald. “One of the rules of Greek lament poetry is that it mustn’t mention the dead by name in case of invoking a ghost. Maybe the ‘Iliad,’ crowded with names, is more than a poem. Maybe it’s a dangerous piece of the brightness of both this world and the next.”

An eclectic guy who likes to observe the world around him and comment about those observations.
View all posts by swabby429 →
This entry was posted in Controversy, cultural highlights, History, Meanderings, philosophy, religion and tagged civilization, Classical Era, Council of Constantinople, Emperor Theodosius, lament, National Day of Lament, sorrow, theocracy, wisdom. Bookmark the permalink.