What are essentials and what are pleasant extras? What should I keep and what should be sold or given away?

Even though I’ve done a lot of downsizing, there is still an awful lot of stuff in the house. As I’ve lived, people have given me some nice things and people have sold me nice things. I’m glad to own most of these things because they’re useful or they’re attractive.

Thankfully, recycling and donating stuff is included in my consumption habits. I purposely chose to live in a small house so as to discourage hoarding. When there is a lot of stuff in rooms, the rooms feel cluttered. Clutter is a by-product of living in the same house for 30-plus years.

Contemplating artifacts and becoming more mindful reveals the craving for material things. It shows that the ongoing acquisition of excess stuff has become burdensome. As I’ve grown older and hopefully a little wiser, I’ve seen that while the stuff is nice, it has not provided authentic happiness and peace. That said, I’m still grateful for the joy each thing has provided.

As I sit at the desk, I see an array of decorations on the walls and souvenirs on shelves. These items are in my life because of ideas that I felt necessary to fulfill. The ideas being that it would be nice to have collections of things. These ideas were instilled during childhood because of the familial culture of collecting things.

Dad identified himself as a coin collector. He also enjoyed being an antiques dealer even though he rarely sold any of his antiques. Everyone in the family adopted some type of collecting habit because we saw dad’s apparent joy in assembling collections.

I reckoned a little bit of reverse engineering regarding the dad’s and my own collecting habits. Dad grew up during the Great Depression on a farm under sometimes subsistence level existence. The family had to “make do” with only a few possessions they owned. After leaving home, dad became established in a somewhat prestigious, well-paid career. He made up for his childhood lack by acquiring and keeping lots of stuff.

I had a somewhat similar path. After leaving home, I had to cope with a regional economic recession. Work was difficult to find, and I had to “make do” with whatever food and things I could scrape together. As life became more difficult, I packed everything I owned into my little Chevy Vega station wagon and returned to Nebraska. In Nebraska, I enjoyed a reasonably good career.  Although it wasn’t high-paying work, the pay was more than enough so I could finally buy nicer things.

The reverse engineering of dad’s and my collecting habits triggered an epiphany. In a manner of speaking, our lives had plenty of parallels. My life has been the manifestation of the idiom, “like father, like son”. 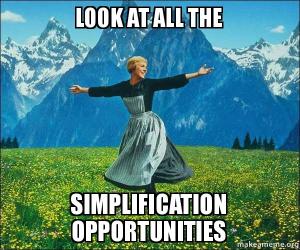 There is one important aspect of dad’s life that I do not want to repeat. That is leaving a large volume of stuff behind for his survivors to liquidate. To get rid of dad’s possessions required finding an antiques reseller willing to purchase about half of dad’s collections. Later on, I had to contract an auctioneer for a sizable estate sale.

The process of liquidating dad’s stuff was time consuming and emotionally draining. I don’t want to burden my survivors with a similar obligation.

Before the Nazis chase me out of the country or before I become less physically agile, I’d like to achieve my ideal goal. That is of being able to pack all of my belongings into a vehicle about the same size as the old Vega Kammback.

Living with a lot less stuff still seems like a far-off goal but one pragmatically worth pursuing. Someday, it will probably be mandatory.

The Blue Jay of Happiness quotes the activist mystic, Peace Pilgrim. “The simplification of life is one of the steps to inner peace. A persistent simplification will create an inner and outer well-being that places harmony in one’s life.”

An eclectic guy who likes to observe the world around him and comment about those observations.
View all posts by swabby429 →
This entry was posted in Contemplation, Hometown, philosophy and tagged accumulation, clutter, collecting things, decluttering, simplification. Bookmark the permalink.