The weather was unsettled and caused me to feel the same way. It just so happened that I also wanted to piece together some arrangements in some vintage pottery that’s been sitting on the supply shelf longer than usual. I also wanted to utilize some artificial elements that I had just rinsed and refreshed. 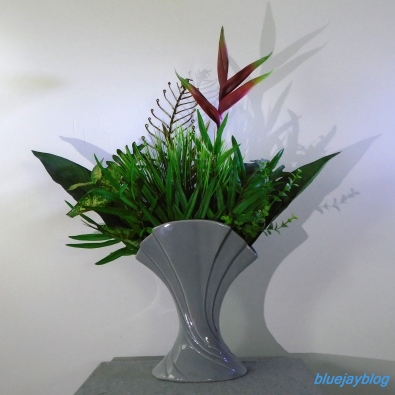 The creative storm moved in like a turbulent summer low pressure system. Greenery reigned and predominated the first project. The result was a tropical-themed arrangement for the vintage USA Pottery vase.

An array of carefully preserved artificial blooms from the 1980s needed to be displayed again. After cleaning and repairing them, their new home is an old Haeger centerpiece dish.

The Haeger cone vase goes back to the jungle, but in a more understated manner than the first project. The bird-of-paradise nests in an underbrush of angular greenery.

The Blue Jay of Happiness quotes the late, great George Carlin. “I don’t like to think of laws as rules you have to follow, but more as suggestions.”

An eclectic guy who likes to observe the world around him and comment about those observations.
View all posts by swabby429 →
This entry was posted in Floral Arts, Hobbies, projects, Vintage Collectables and tagged Haeger Pottery, USA Pottery. Bookmark the permalink.