The calm of this Sunday morning is comforting as I ease into consciousness. I sit on the porch step waiting for “Orange”, the cat who is here nearly every morning for his snack and early human companionship. I wonder if he smells coffee and knows that I’m waiting for him. If this is true, will he know that I have temporarily switched brands of coffee? 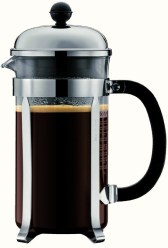 My friend Jorge stopped by the house yesterday. As a gift, he presented me with a bag of “Juan Valdez” coffee. I prepared some of it in the French press then we savored the flavor. The 100-percent Columbian blend was everything I expected it to be.

Since the gifted coffee bag is open, I will have to use it; otherwise the coffee will lose too much aroma and flavor. The coffee that Jorge gave to me has a deep, almost chocolaty taste. It has the flavor of friendship.

Even though cats should never drink coffee due to the danger of caffeine poisoning, “Orange” loves the aroma of it. I prefer to think that he likes the combination of the coffee’s aroma and mine, together.

I smile while pondering the deceit about the cartoon cat “Garfield” and his supposed affinity for coffee. “Garfield” can drink coffee because he’s only a figment of the imagination.

“Orange” peeks out from beneath an old blue Chevy Impala and glances at me. After several moments, he saunters across my yard and arrives at my feet. I softly speak his name, then he leaps onto my lap. Today, he is indifferent to the coffee aroma. He’s also apathetic towards the kitty treats. “Orange” simply wants to cuddle.

After drinking the last sips of coffee, I park the mug onto the concrete porch step. “Orange” looks into my eyes and we exchange the “slow blink” of affection. I offer treats to him again. He finally accepts, then delicately nibbles the tiny gifts.

“Orange” rubs his body against my left leg; I massage beneath his jaw; then he turns–ready to depart. Halfway to the street curb, “Orange” halts and checks to make sure I’m still here. Then he scampers across the street into the shadows.

I decide that it’s time to go back into the house to pour another cup of “Juan Valdez”. I sit at the desk to write about and share the pleasant experience.

The Blue Jay of Happiness enjoys a line by T.S. Eliot. “I have measured out my life with coffee spoons.”

An eclectic guy who likes to observe the world around him and comment about those observations.
View all posts by swabby429 →
This entry was posted in Contemplation, Friendship, Hometown, Meanderings and tagged coffee, early morning, Juan Valdez, Orange the cat. Bookmark the permalink.

2 Responses to Cat And Coffee Time