One day, during the noon hour, my friend Wayne was “bumped” by a car as he walked across a downtown street. The driver hadn’t noticed Wayne until it was too late to avoid knocking him down. My friend was transported to the hospital in order to check for internal injuries. Wayne was “lucky” because he had “only” sustained a broken leg and several bruises. 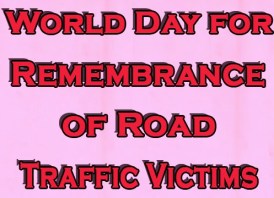 Our species has not yet evolved to protect us from motor vehicle accidents. Mass and speed are the major causes of injury or death when a vehicle is involved in an accident. The speed doesn’t necessarily have to be very fast to cause harm. A vehicle that contacts a bicyclist or pedestrian at very low speed can cause severe injuries or even death.

Today is the World Day of Remembrance for Road Traffic Victims. The United Nations instituted this commemoration in order to raise awareness of how traffic accidents affect people around the world.

Over half of all traffic fatalities happen to “vulnerable road users”. The victims are bicyclists, motorcyclists, and pedestrians. The higher proportion of these deaths occur to road users in low-income nations than in higher-income nations. 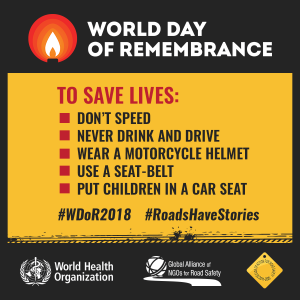 The observance has become important in the worldwide efforts to reduce traffic casualties. Today we remember the tragic emotional costs and economic impact that occurs with each traffic fatality.

Traffic accidents can affect everybody. Today, I ponder the heartbreak after a multi-fatality accident in Lincoln, Nebraska several years ago. My second-cousin Sandra along with her spouse and children were killed when a truck collided with their mini-van. Our family will never forget this tragedy.

In the 1987, my boyfriend Takeo was killed instantly near Osaka, Japan in a chain-reaction wreck on an expressway. Takeo’s family and I still feel the loss of this creative, talented man.

The commemoration also recognizes the work of rescue services directly involved with the aftermath of accidents. It’s important to also remember the emotional support workers who aid surviving accident victims along with the loved ones of people who die in crashes.

World Day of Remembrance for Road Traffic Victims is a meaningful time for us to pause and remember those who have lost their lives on our streets and highways.

The Blue Jay of Happiness quotes the late Stephen Hawking. “There are too many accidents that can befall life on a single planet.”

An eclectic guy who likes to observe the world around him and comment about those observations.
View all posts by swabby429 →
This entry was posted in cultural highlights, Hometown, Transportation and tagged traffic fatalities, traffic injuries, United Nations, vulnerable road users, World Day of Remembrance for Road Traffic Victims. Bookmark the permalink.