Most of the cars in the junkyard are not total wrecks. They appear to have either minor damage or perhaps they simply stopped running. Anyhow, that’s just my opinion, I have not examined the vehicles close up, in person.

The junkyard is located at the eastern city limits of Norfolk, Nebraska. The city decided to construct a concrete bike/hike trail on top of the flood control levee as a pleasant scenic way to encourage Norfolkans to exercise and enjoy the outdoors. Unfortunately, the junkyard is very near the trailhead. There is no solid fence to wall off the eyesore from

public view. I’ve become used to the depressing collection of vehicles arrayed on that property.

To be fair and politically correct, I should probably say the lot is a “salvage yard” because it is located behind an auto salvage business that sells salvaged car parts to vehicle repair companies and to the general public. The vehicles are stored according to make and model as much as is practical. That is Fords are pretty much in a row, Pontiacs in another, Dodges in another, and so forth.

As I look at the cars every time I walk on the bike/hike trail, I make note of some of the individual vehicles. The amounts of cars of each type indicate which brands of vehicles I should avoid purchasing. This comes to mind because most of the cars in the junkyard are newer than the car I currently drive. In a sense, the junkyard cars are testaments to planned obsolescence.  As a side-note, the junkyard is only a few blocks away from our town’s Chrysler/Dodge/Ram/Jeep dealership.

The other day, I brought my small camera to shoot some photos along the levee. As I selected viewpoints to compose pictures of the junkyard, I contemplated the possible stories and scenarios associated with the cars.

Most of them were probably financed by some type of bank mortgage because each vehicle cost several thousands of dollars brand new. Some of them may have been traded in on newer vehicles, that means several of the cars might have been owned by one or two other people–probably financing those purchases.

There are likely hundreds of sleepless nights represented on the junkyard lot. How many of the motorists worried about squeezing car payments into their budgets? What about the disappointment when the vehicles stopped working? Was there personal injury or even human death associated with any of those wrecked cars? What about each vehicle’s environmental impact? 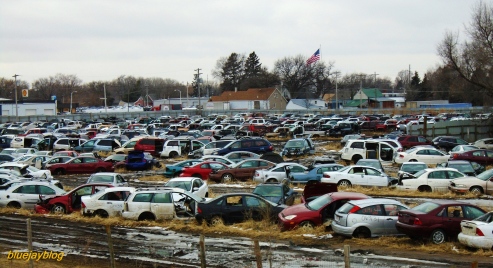 It would be interesting if people composed diaries or journals about their cars. We could read about the owners’ excitement and happiness upon taking delivery of their new cars. There would be stories about family vacations and road trips taken in the vehicles. Young people may have learned how to drive in some of these cars. How many of these were the someone’s first car? How many of these were someone’s last car?

Perhaps such journals could be provided by the manufacturers. The first chapters might describe the vehicles’ origins. This would include where the raw materials were sourced. Who were the suppliers of the iron, plastics, and various components? There might be a paragraph or two about the design and fabrication of prototypes plus the factories and employees who built the vehicles.

The ultimate owners could write in who they bought the car from, where the dealership was located, and the finance company or bank they paid. The owners might even mention the joy they felt after making the final payment installment on their vehicle. There might be some pages devoted to maintenance costs such as fuel and mechanics’ bills. Some owners might wax nostalgic over the many hours they spent lovingly washing and detailing their vehicles. Eventually, the journals might end in sadness about the demise of the car or reluctance to trade it in for a replacement vehicle.

The junkyard is a metaphor for a human cemetery. Both places remind us of the impermanence of all things. All things arise and all things have an ultimate demise.

If only each of those cars, SUVs, and trucks could talk. There are stories galore they could tell. The biographies would be worth reading.

An eclectic guy who likes to observe the world around him and comment about those observations.
View all posts by swabby429 →
This entry was posted in Contemplation, Environment, Hometown, Meanderings, Transportation and tagged auto salvage, junkyards, motor vehicles, scrap recycling, wastefulness. Bookmark the permalink.

2 Responses to The Junkyard