I think there is an individual threshold regarding multitasking for each person. Some folks seem to be excellent multitaskers such as jugglers who simultaneously juggle knives, tell jokes, and ride unicycles. Most of the rest of us are better at single-tasking.

I have asked my ex-boyfriend about his multitasking skills. Steve is a part-time illusionist aka stage magician. He confided that there is no such thing as multitasking in his mind. While on stage, Steve single-tasks. His presentations give the illusion of multitasking, but what actually happens is that he has rehearsed the ability to swiftly switch between single tasks. Whenever he learns a new illusion, he practices it, one step at a time, then he continually practices combining the steps by switching his attention very quickly until the combination appears to be a flawless singular flow of action.

By contrast, I’m not very skilled at multitasking, but I can  pull off the illusion of multitasking if I am forced into doing it–for only short time-spans. For instance, while engineering my live radio show during a severe weather emergency, solo. I’d necessarily need to keep my show on the AM radio station coherent, monitor the automated FM station, keep an ear on the weather alert unit, dash to the newsroom to retrieve hard copy from the printer, answer phone calls from the public, interrupt programs on both stations, and read the relevant warnings and watches that I had quickly edited as they applied to people living within the range of our radio stations’ signals.

In the short-term, this was a thrilling, intense process. However, after about an hour of such multitasking I’d become tired and frazzled. It was such a relief when coworkers arrived to help with the emergencies. Like Steve, I had to juggle a lot of tasks and combine them such that my audience perceived the end product as a singular action. My mental capability to cheerfully maintain that blending is far lower than Steve’s abilities to do so. I can multitask well, under fire, but Steve multitasks matter of factly.

Some people compare the human mind to a computer mind. It turns out that this is a poor analogy. Computers are designed to perform many tasks simultaneously. Your device monitors, updates several functions, and displays various results at the same time. The human mind evolved differently. Human minds can create the illusion of multitasking because they can learn to swiftly, continually switch back and forth to each individual task.

If we purposely try to perform multiple tasks precisely, simultaneously we become confused and restless then reach our stress threshold quickly. When humans multitask, we can only perform simpler things and do them more slowly than computers and our devices are capable of 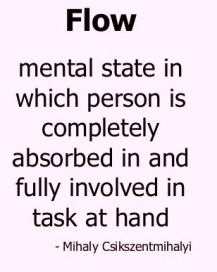 doing. Our devices can process multiple programs or apps in parallel at the same moment, our conscious minds don’t. We multitask by processing quickly, in series.

Meantime, when a person single-tasks, she or he can concentrate on the work at hand. Ideally, we are able to focus flawlessly on our project and finish it to a satisfactory conclusion. This is the logic behind distracted driving laws. Driving a vehicle while texting or eating or doing anything other than driving is extremely dangerous. We drive safest when we’re single-tasking.

So when we believe we are multitasking, we are actually quickly switching from task to task. Our minds are very capable of diverting its attention from one subject to another in the blink of an eye. We might believe we are more productive, but we are mainly being busy. In reality, we are actually working harder, but not more effectively. In most instances, our best work comes as a result of single-tasking.

The Blue Jay of Happiness quotes the Ancient Latin writer, Publilius Syrus. “To do two things at once is to do neither.”

An eclectic guy who likes to observe the world around him and comment about those observations.
View all posts by swabby429 →
This entry was posted in cultural highlights, Meanderings and tagged concentration, focus, multitasking, scattered, single-tasking, unfocused. Bookmark the permalink.