I just now realized that more time than anticipated has passed while I fiddled with the shortwave band on the old ghetto blaster this early morning. There was no particular reason to skim the frequencies in

search of a far away radio station to hear. The device was standing on the cabinet next to the desk. I just turned it on and began turning the tuning knob.

I finally came to my senses and realized it was time to tap out some words for today’s bluejayblog post. One good thing came out of playing with the ghetto blaster–the topic for today.

Goof, as a noun, has several meanings such as an imbecilic person or a clumsy mistake. As a verb, it means to blunder, to fumble, or to loiter. As a gerund, it is usually paired with “around” or “off” as a slang expression for wasting time or engaging in idle pastimes while neglecting constructive obligations. We sometimes say, “goofing around” or “goofing off”.

Now seems like a good time to pair “goofing” with “off”,  just because.

The act of goofing off doesn’t get the respect it deserves. If we don’t over-indulge in it, goofing off is one of the beautiful things about life. When we goof off, we let our hair down and do what we’d rather be doing in the moment. I like to pay attention to what people do when 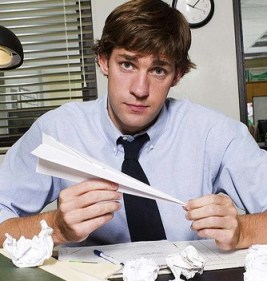 they’re goofing off. They might be distracting themselves by staring at their phones–surfing the Web or texting. Some folks doodle or sketch. Some active folks might engage in more physically active goofing off.

When I was much younger, I liked to fling Frisbees with my siblings or friends. Those instances of goofing off are now very fond memories. I even remember the fun being spoiled whenever the Frisbee landed on a roof.

Right now, it’s early Sunday morning. Maybe I shouldn’t be doing something creative. I should be goofing off. Perhaps putting together today’s post has been just that. I’m going to wrap this up so we both can go ahead and goof off for awhile. Maybe I’ll twiddle with the ghetto blaster some more.

The Blue Jay of Happiness quotes the actor, John Goodman. “Kids are at my level. I like goofing around with them.”

An eclectic guy who likes to observe the world around him and comment about those observations.
View all posts by swabby429 →
This entry was posted in cultural highlights, Meanderings and tagged goofing around, goofing off, wasting time. Bookmark the permalink.