I recently drove the short distance from my home located in Norfolk in Madison County, Nebraska to Wayne, in Wayne County, Nebraska. I had not been in Wayne for a couple of months so I was surprised to see a large electricity generating windmill on the horizon just north of state Highway 35 near the small village of Hoskins.

I knew that Nebraska Public Power District had planned to erect windmills in a portion of Wayne County as a major aspect of their infrastructure upgrade, but I had not expected to see any so early in the year. I certainly did not know there would be a few so near to the highway in the southwestern part of that county. As the ol’ Camry drove closer to the little town of Winside, more and more windmills were visible to the west. There must be hundreds of them. This is more than a mere windmill farm; it’s a windmill ranch.

I immediately regretted not packing one of my cameras for the short errand-running trip to Wayne. The only device that could take photos that day was my Samsung Galaxy J7 smart-phone. Regardless of the oversight, I decided to take a few snapshots of the windmills on my return trip to Norfolk that afternoon. 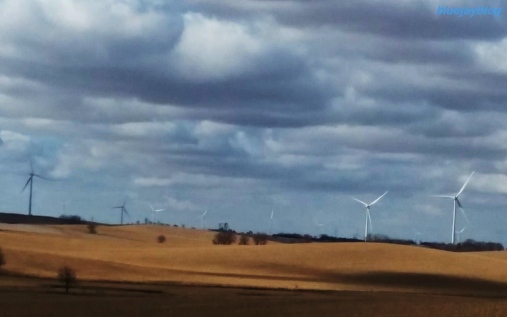 After taking care of the few items of business on my agenda, I ate lunch with my sister, then left Wayne with my phone ready to take some pictures. Instead of retracing my usual route along Highway 35, I detoured to take the state highway past the tiny town of Carroll. The further west I drove, the more numerous the windmills. At what appeared to be the mid-point of the windmill ranch, I turned south and began driving on a rather primitive, graveled Wayne County road. Voilà! There was a plethora of photographic vistas.

Wherever I decided to park the car, the landscape and the sky provided dramatic views. The biggest problem was that I had to shoot images nearly blind. The phone’s screen is not bright enough to see while taking landscape photographs in the middle of a partly sunny afternoon. I could barely see the general outlines of my subjects. Luckily, my trial and error technique worked better than anticipated. Also, the phone’s camera takes better photographs than expected. Furthermore, the wind was strong and gusty so the hand-held photography was extremely challenging.

Here are a few of the images I snapped in north-central Wayne County: 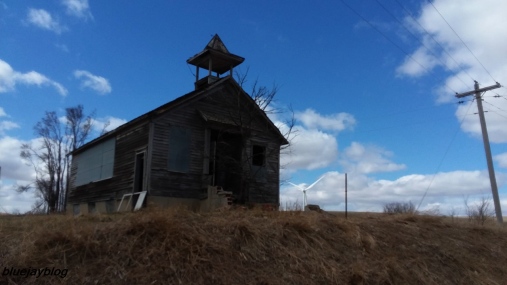 The Blue Jay of Happiness quotes Ed Begley, Junior. “The two most abundant forms of power on earth are solar and wind, and they’re getting cheaper and cheaper.”

An eclectic guy who likes to observe the world around him and comment about those observations.
View all posts by swabby429 →
This entry was posted in cultural highlights, Environment, Hometown, photography and tagged Nebraska Public Power District, Northeast Nebraska, smart phone cameras, Wayne County Nebraska, wind turbines. Bookmark the permalink.

6 Responses to Windmills Of Wayne County