We had another stormy day, so I decided to investigate an old manila envelope that was left over from dad’s estate. It contained some items that he apparently deemed noteworthy and worth saving. Maybe you will enjoy some snippets of the contents of that large envelope.

A press release photo from Nissan barely fit into the dimensions of the envelope. I cannot imagine where or when dad acquired this picture, or why he kept it. I’m guessing the photograph was shot before the mid 1970s prior to Nissan dropping the Datsun name from their American line-up.

Back in the day, U.S. auto manufacturers used to provide glossy, glamorous brochures for new car dealers to give away to prospective customers. Dad used to look forward to September of each year, when he picked up a brochure from the General Motors and Ford dealerships in the area. The only one he saved for posterity was this Buick brochure. Dad probably considered it a keepsake because he purchased a beige 1961 Buick LeSabre four door hardtop from the Buick dealer.

Full size Buicks used to be sold in four tiers: Electra, Invicta, LeSabre and Estate Wagon. Before the 1970s Buick had phased out the mid-tier, Invicta name plate and in 1990, retired the deluxe tier, Electra models.

I think the station wagon models of this car looked ungainly. 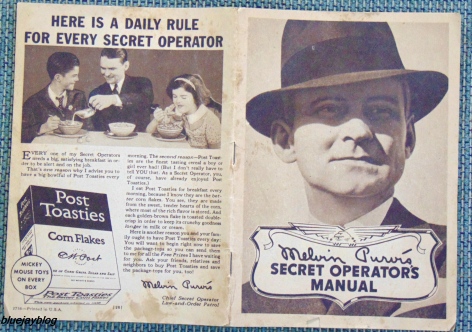 The “Secret Operator’s Manual” probably dates from the 1930s when dad was a young boy. I’m guessing that it was a prize inside a box of cereal. Dad’s favorite cold cereal had always been “Post Toasties”.

The small booklet must have been absolutely fascinating to a child growing up in rural Nebraska during the Great Depression.

The Nebraska textbook is incongruous with dad’s childhood because it was published in 1956 by University Press. Dad enjoyed continuing education, so he may have found this at a library or school sale.

There are so many questions I wish I could ask dad about these artifacts.

An eclectic guy who likes to observe the world around him and comment about those observations.
View all posts by swabby429 →
This entry was posted in cultural highlights, History, Hometown, Meanderings, photography, Youth and tagged archives, booklets, books, brochures, photographs. Bookmark the permalink.