To go along with the two posts this week that used nostalgia as a theme, I decided to try for a hat trick. This third post is a complete surrender to the golden oldie impulse. Three mid-20th-century containers were in the staging area of the supply shelf,  just waiting to be used. 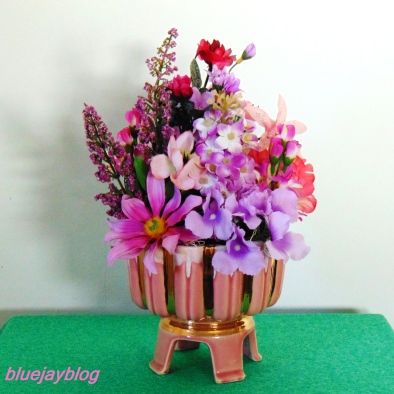 The four-footed California Pottery planter is an obvious choice. The coral pink with gold accents practically screams 1950s. A period inspired posy enables imaginary time travel back to the day. 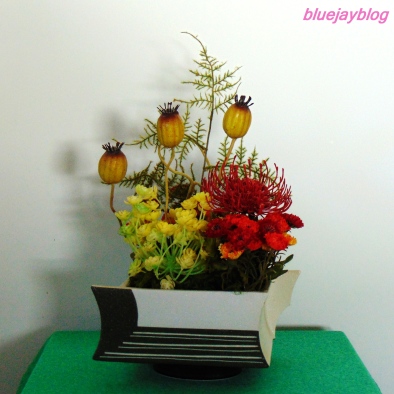 The late 50s and early 60s come through in a modernistic rectangular planter. It even sports a couple of tail-fins. This design is reminiscent of the early space age, so I created an arrangement that is out of this world.

The 1960s are represented by this Royal Hager shell-shaped vase. A period-inspired arrangement fills out this rare example of Royal Hickman’s artisan-ship skills.

The Blue Jay of Happiness quotes architect and furniture designer, Charles Eames. “The details are not the details. They make the design.”

An eclectic guy who likes to observe the world around him and comment about those observations.
View all posts by swabby429 →
This entry was posted in Floral Arts, Hobbies, Vintage Collectables and tagged California Pottery, mid 20th century design, nostalgia, Royal Hager, Royal Hickman. Bookmark the permalink.