I have not seen “Orange” the cat for several weeks, but there is another stray that has been investigating me since mid-April. The new cat is a white short-hair that reminds me of the Internet meme cat, “Smudge”. He prances across my yard at various times during the day. 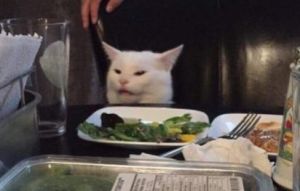 I first noticed this cat when our eyes met while I walked to the garage one morning in March. He had been hiding behind an elm tree while stalking me. He was skittish as is typical with stray cats and remains shy now. Whenever we’ve come face to face, he freezes in place for a few moments, glances at me for awhile, then reverses direction and prances away.

The aloof white cat is as much a mystery to me as I probably am to him. He is an anomaly in the cluster of stray cats that populate the neighborhood. The other individuals are mostly grey tabbies, black and white tuxedos, calicoes, black cats, and orange cats. The pure white cat looks like he should belong to a human, but his behavior betrays his stray status. I wonder why he has recently appeared. Was he dumped by negligent humans? Is he the odd cat from a street-born litter?

Anyhow, the “Smudge” lookalike was lounging beside the large tree in my front yard early this morning. I perched myself on the front step and sipped a cup of coffee. The cat and I simply observed each other. Neither of us approached the other. I called out to him, but the cat didn’t flinch nor move away. I wonder if he is warming up to me or if he is just being arrogant. The white cat remained near the tree as I stood up and entered my house in order to begin writing today’s blog post.

I’m glad the white cat decided to relax in the front yard this morning. He inspired the ponderous topic of the day–mystery.

“The true mystery of the world is the visible, not the invisible.”–Oscar Wilde

The Universe is very mysterious. Our place in the Universe is also a mystery. I don’t need to travel beyond my yard in order to encounter fascinating things. There is life everywhere I look. There are numerous plants–small or tall. Animal life is abundant. Insects crawl on the sidewalk, some are annoying like the flies and gnats that are attracted to my face. Birds fly in for their visits. There are the stray cats like the “Smudge” lookalike. Then there is me. There are still a few mysteries I have not yet solved about myself. Life presents us with a plenitude of questions.

Isn’t it amazing that we can conceptualize mystery? We notice an unfamiliar object, event, or thought, then our curious nature begins to analyze it.

We can pause in the middle of our day and allow ourselves to become fully aware of our surroundings and circumstances. As we take in the most humble, mundane settings, we notice many things. It is in the ordinary that we can glimpse at the mysterious nature of life. Life is a wonderful, mysterious force of nature. To live fully in the present, for even a few minutes, is to experience the wondrous, mysterious process called consciousness.

I believe there will always be mysterious things.

The Blue Jay of Happiness quotes Stephen Hawking. “We think we have solved the mystery of creation. Maybe we should patent the Universe and charge everyone royalties for their existence.”

An eclectic guy who likes to observe the world around him and comment about those observations.
View all posts by swabby429 →
This entry was posted in Contemplation, cultural highlights, Environment, Meanderings, philosophy, Science, Wildlife and tagged animals, life, meditation, mysteriousness, mystery, plants, Smudge the cat. Bookmark the permalink.