We seem to be having many more days and nights of high wind warnings lately. I do not recall the National Weather Service warning us of the possibility of wind speeds of over 50-miles-an-hour with such frequency. Their forecasts have been largely accurate. Just this year alone, northeastern Nebraska has experienced several days featuring 60 and nearly 70-miles-an-hour sustained winds.

As a result of these high winds, the numerous elm trees in my yard shed twigs, sticks, and small branches. This necessitates the need for manual

raking. It usually takes an hour or more to rake and dispose of the debris from each high wind incident.

One recent Monday, I raked almost to the point of exhaustion. The next day, winds gusting to 66-miles-an-hour created yet another mess in the yard. That Wednesday required yet another hour or so of work.

I mention these incidents, not so much to complain (it’s futile to gripe about Mother Nature) but to ponder the body’s senses. Unsurprisingly, the work brought about feelings of tiredness and physical pain. This is a good thing because the senses seem to be in working condition. Apparently the senses are doing their jobs well in order to help me survive and thrive.

Feeling mild exhaustion and the sting of perspiration in the eyes, tells me to take a break. I intend to sip some cool water, but instead, I gulp about a pint of it, then refill the tumbler with more from the tap. I drink another half portion when the thirst is quenched. Refreshed, I soon return to the yard for another round of “yard-raking meditation”.

I use the word, “meditation”, because I strive towards remaining aware of the body’s physical signals while engaged in activity. Yard-raking brings about many sensations to pay attention to. The mindful attitude keeps the yard clearing chore interesting and saves me from tedium. This attitude also informs me when it’s time to take breaks.

While performing physical labor, it’s easy to appreciate the sense of touch, since that is the predominant feeling at that time. I steer my focus to vision in order to see where I’ve raked and where I haven’t yet done so. I hear birds chirping in the trees and lawn mowers roaring in other yards. The sense of smell notices some wild flowers nearby and the odor of recently deposited doggie-dew. Thank goodness for noticing that, I hate cleaning that stuff off of my shoes. The sense of taste comes into play when reflexively licking my lips.

So, in a way, when I pay attention to one sense, this leads to appreciation of the others. I regain respect for how the human body has evolved and adapted throughout the aeons. It’s really amazing how paying attention to one’s senses during routine chores can trigger the survival mechanism and gratitude.

“The strong man is the one who is able to intercept at will the communication between the senses and the mind.”–Napoleon Bonaparte

I wonder how many of the great historical figures contemplated their bodies’ physical senses. Did they achieve fame or infamy by responding to them or ignoring them? I’m guessing great artists and writers of timeless literature pay close attention to the five senses. They cultivate synergy between the senses, along with memory, desire, intellect, and what is often called the soul. When all of these are humming along together in optimum fashion, we might say the individual is fully awake.

There is the frequently used analogy that compares awareness to a stringed musical instrument. If a guitar string is too relaxed the sound will be dull; if it is adjusted too taut, the string will break; if it is tightened optimally, the string is able to emit harmonious sounds. Likewise, when we act on “auto-pilot” our awareness is low. If our senses are over-stimulated, we feel unpleasantly anxious. When we pay moderate attention to our senses and accurately interpret them, we feel in sync with the world. 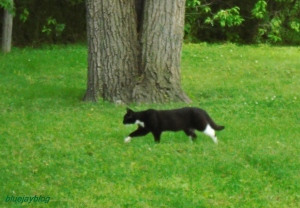 A stray, feral cat walked into my field of vision while I raked the front yard. I remembered that biologists have determined that cats do not see all of the colors we see. Their vision is adapted to dark. They also lack the ability to see close-up. They utilize the senses of hearing, touch, and smell to a greater extent than we do. The manner in which felines perceive the world is much different than the ways we construct our reality. This is one reason cats fascinate me.

When technologists compare human senses to those of cats and other animals they develop virtual advances. These comparisons are used to create new forms of artificial intelligence. Such devices can optimize more senses we humans can apply to our own lives. Cybernetics engages the senses in innovative ways.

Such meanderings about the senses meant that I was no longer paying attention to the job at hand. The yard-raking meditation had gone off the rails. I refocused the mind onto the task, and soon the yard looked tidy again.

The Blue Jay of Happiness quotes 20th century astronomer, Edwin Powell Hubble. “Equipped with his five senses, man explores the Universe around him and calls the adventure Science.”

An eclectic guy who likes to observe the world around him and comment about those observations.
View all posts by swabby429 →
This entry was posted in Contemplation, Environment, Health, Hometown, Meanderings, philosophy, Science and tagged awareness, cats, perception, the five senses, work. Bookmark the permalink.