When traveling, it’s fun to bring back souvenirs. Years later, they are memory jogs for pleasant reminiscing. Souvenirs aren’t only for tourists, small gifts received as rewards for special events serve the same purpose. I prefer regular pocket change coins because they don’t take up much room. Also, unlike trinkets, coins are quite robust. After returning from an international vacation, I empty my pockets of change. Eventually, I stash them away in a box or small container.

This week, the weather was disagreeable and I was feeling nostalgic, so I brought out my very meager coin collection. While going through the coins, I decided to photograph a few of them. Most of my coins have little or no numismatic value. It would cost me more to sell them than to simply keep them at home.

These are mostly various denominations of Euros. In the top row are a couple of British coins. In the bottom left is a Pound Sterling (Quid). The bottom right coin is 5 Rupees from India. The color is a bit off because I used natural light from the window, which altered the camera’s automatic color balance. I liked the effect, so I did not correct it. 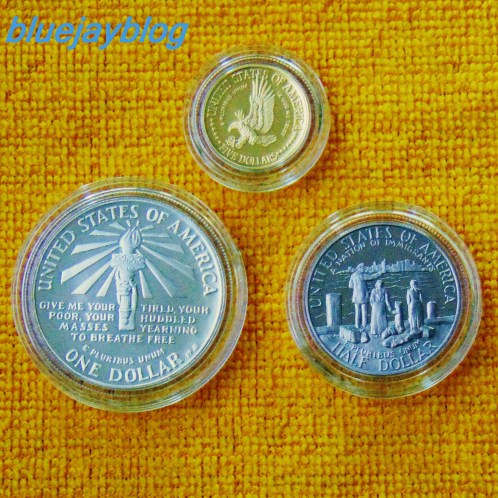 The United States celebrated the centennial of the dedication of the Statue of Liberty in 1986. The U.S. Mint released a special edition of “proof” coins as a salute to Lady Liberty. I decided to splurge and ordered the Liberty set. Included were, a silver dollar, a silver half dollar, and a gold five dollar coin. This is the only set of coins in my collection that have significant trade value. These will be going back to my box at the bank this weekend.

There are a couple British coins and a couple of coins from Mexico. The horseshoe shaped token is from a shoe company. A George Washington half-dollar proof coin is in a plastic sheath to protect it. It was issued to commemorate Washington’s 250th birthday in 1982. At the bottom is a bronze medal that salutes William Clark of Lewis and Clark fame. The coin in the Bicentennial packaging is the Nebraska edition of a series. The necklace and coin pendant was gifted to me by my step-mom after one of her trips to see her family in Thailand. I don’t know how to read Thai, so I don’t know how many Bhat it is worth. 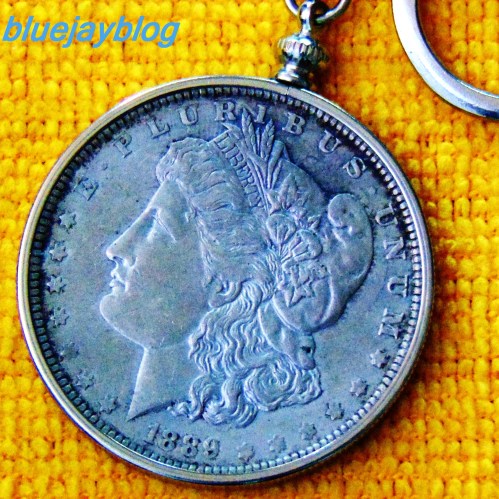 The 1889 silver dollar was a birthday gift from my brother in 1989. I always kept it hanging on a wall because using it as a key-chain would damage the coin. This is nice reminder of my late brother.

The Blue Jay of Happiness likes this line from Ancient Athenian dramatist, Euripides. “Silver and gold are not the only coin; virtue too, passes current all over the world.”

An eclectic guy who likes to observe the world around him and comment about those observations.
View all posts by swabby429 →
This entry was posted in cultural highlights, photography, Travel, Vintage Collectables and tagged foreign coins, pocket change, U.S. Proof Sets. Bookmark the permalink.