I touched upon the life of a recently departed acquaintance a couple of weeks ago on this blog. One of his ironic quirks was that he had a dim view of nostalgia. Perhaps he had this attitude because of his scholarship in history and his work as a high school level social studies teacher. Max admitted that he often indulged in nostalgic reminiscing as do many seniors and elders. In the midst of daydreaming about the golden years of his past, he’d compare it with the present.

The flash-forwards promptly ended each daydream. Max realized he was thankful to be living in the here and now. My friend once told me that he had lived a fairly average childhood once his family immigrated from Europe in the 1930s. He and his sister grew up during the 1940s and pretty much fit in with society at the time. He had pleasant memories of his youth, but he came to the conclusion that he needed to come to terms with his past life being over and gone. There is so much 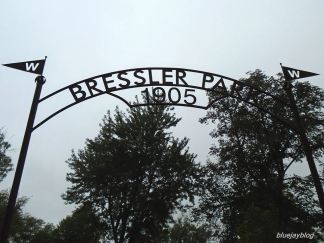 richness to be discovered in the present. Balancing nostalgia with awareness of the present is an ongoing process.

I think Max’s attitude about nostalgia was similar to my own. I believe there is a time and place for dreaming about the past–usually Sunday afternoons or while cleaning house. Lately, I’ve indulged in nostalgia when choosing topics to explore on this blog. This is not surprising, because older people love to reminisce. Put in perspective, nostalgia doesn’t need to be an escape nor a crutch from the necessity to deal with the present.

I seldom yearn to return to childhood and youth. For the most part, life was very boring then. Part of my childhood was lived in Lincoln, Nebraska. Two incidents taught me important lessons. They were wake-up calls to remind me to pay much closer attention to my actions.

The first one was when my brother and I accidentally burned down an evergreen tree in the backyard of our home. We had watched one of those old movies that depicted Ancient Rome. The next morning, we decided to make torches and march around the yard like Roman legionnaires. Our next-door neighbor witnessed our play, then yelled at us, threatening to report us to the police. In a panic we tossed our torches on the ground. The flames ignited dry pine-needles and the tree was instantly engulfed in flames. By the time the fire department arrived, the tree was a black, smoldering skeleton.

A couple of weeks later, we were visited by the fire department precinct’s head officer. He lectured us about the seriousness of setting fires. This fire was probably the worst thing I’ve ever done. I didn’t need to hear the lecture, but I understood why he had come to our home to talk. 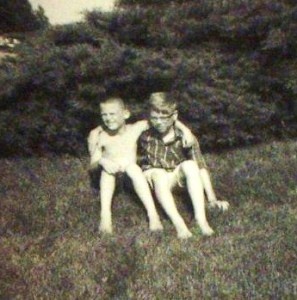 Jeff–on the left, with me

The second incident came about also out of inattention. My best friend Jeff and I had bicycled a mile away from home in order to explore the railroad trestle that crossed over 27th Street. We walked the rails and enjoyed the view of the street from above. A freight train rounded the curve just ahead of us. Jeff managed to scramble off of the bridge, and I dashed onto a horizontal I-beam that supported the solid trestle. After the train sped by, it was quite an ordeal to rescue me from the precarious perch. That was the only time Jeff and I had done anything so dangerous.

Most of the time, during the summers, Jeff and I usually just hung out, trying to cope with the hot, humid days that are common in Lincoln. All things considered, the best nostalgic memories of those years include either my brother or my best friend. Great times.

This should be just the right amount of nostalgia for one day. It’s time to reassert some balance with the present.

The Blue Jay of Happiness quotes the late, great Frank Zappa. “It isn’t necessary to imagine the world ending in fire or ice. There are two other possibilities: one is paperwork, and the other is nostalgia.”

An eclectic guy who likes to observe the world around him and comment about those observations.
View all posts by swabby429 →
This entry was posted in cultural highlights, Friendship, Hometown, Meanderings, Youth and tagged childhood memories, Lincoln Nebraska, nostalgia. Bookmark the permalink.