A Civilization Of Loners?

Ruben and I nursed diet colas while we reclined in his pair of vintage folding aluminum patio chairs. The kind of chairs constructed of very lightweight metal framing with interwoven plastic strips of green and white. Such chairs are prone to being blown into the next yard if left outdoors on a very windy day. 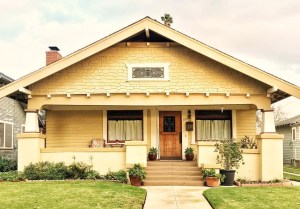 His chairs were situated off to the right edge of the porch, near the railing. The porch was at the south wall of his mother’s old yellow bungalow which was probably constructed in the 1910s or 1920s. This style of house is common in older neighborhoods throughout Nebraska and other locales in the Midwest.

The reason Ruben and I decided to sit outdoors during the hot, muggy afternoon was to observe the distant approach of a thunderstorm from the west.

We liked to hang out together because our personalities were so similar. He was one of those guys with a silly sense of humor but also enjoy very long stretches of quiet time. It was common for us to spend hours together,  yet rarely speak. Ruben was the ideal friend with whom to spend a peaceful afternoon on a porch watching traffic pass by on the street and cumulonimbus clouds forming in the sky.

When we did converse, the subjects were often cars, baseball, our personal existential crises, and philosophy. We were two quirky guys joined together as best pals. Our close friendship lasted until Ruben married his girlfriend and moved out of the country. The last time I saw Ruben was the day I dropped him and his new wife off at Eppley Airport in Omaha for his connecting flight to Iceland.

While sorting through old papers to discard this week, I stumbled upon the old journal entry dated July 5, 1983. I had written a page and a half about Ruben the week following his departure. It was that journal entry that triggered the memory of the long-ago summer afternoon on his mother’s front porch. I reflected upon how difficult it is, these days, to find people who enjoy spending hours upon hours engaged in serious discussions.

Contemporary life is lived in the express lane. Overflowing information and amounts of events bombard us nearly of the time. It’s difficult to find sufficient moments to concentrate and digest particular subjects in depth.

Even though we can join on line groups in social media and chat about common interests, it’s very rare to meet such people face to face and share coffee time with them or silently sit on the porch steps watching street traffic together. Hardly anybody has time for that.

Ironically, there are hundreds of loners and introverts who blog and vlog. I read many of their posts, and watch some of their YouTube videos. They are all eager to express their feelings to their subscribers. At the same time, there is the wall of separation that is required in order to communicate safely within the worldwide Internet community.

This population of loners and introverts, along with their audiences, are on journeys of self-exploration. Their messages resonate with thousands of like-minded individuals. The result is a community of loners. When all the subcultures are combined together, we have a civilization of loners.

There are many upsides to this arrangement. First of all is the sense of community and belonging. Secondly is the vast sea of knowledge and experiences from which to learn. Third, is that two-way electronic communication between the blogger/vlogger and the audience. The main downside is the absence of actual person to person physical presence. A Zoom conference or seminar is a poor substitute for meeting face to face. Participants are not challenged to take the personal risks of cultivating close in-person relationships.

The state of easy isolation makes it more difficult to find like-minded people with whom to engage deeply in life. The rates of marriage have decreased, the numbers of single person households continues to increase, and the epidemic of loneliness spreads across the globe.

Added to these factors, is that impersonal, electronic communication makes it easier for us to misunderstand and pigeonhole people. Other people are seen as abstract things and not warm, breathing humans. Many of us feel inconvenienced when someone requests our personal presence. Meeting for lunch or coffee seems inconvenient and requires too much valuable time.

It appears to me that we are voluntarily and involuntarily becoming more of a civilization of loners. We are busy folks who love our distractions. It’s becoming harder to find folks like Ruben who enjoy spending lazy afternoons watching the formation of thunderstorms, contemplating cars driving down the street, and love philosophical conversations. If and when you find someone like Ruben, consider yourself very fortunate.

The Blue Jay of Happiness quotes British actor and director, Shaun Evans. “Loner heroes do appeal to that part of yourself that feels as though your genius hasn’t been recognised.”

An eclectic guy who likes to observe the world around him and comment about those observations.
View all posts by swabby429 →
This entry was posted in Contemplation, Friendship, Hometown, Meanderings, philosophy and tagged best friends, conversation, Iceland, Internet, loners, philosophical conversations. Bookmark the permalink.

6 Responses to A Civilization Of Loners?