I miss a couple of the customary salutations of personal paper and ink letters–“Sincerely” and “Sincerely yours”. We rarely, if ever, use these expressions in emails or other forms of Internet communication. The use of “sincerely” at the end of a letter adds a note of honesty and truthfulness to the document. In a manner of speaking, it is like a guarantee of satisfaction. 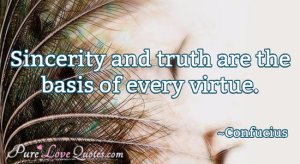 I wonder if the demise of hand-written letters delivered by the Postal Service is a symptom of the decrease of sincerity in our culture or has helped enable insincerity. When we can simply fire off an email with little or no thought of repercussions, our communications become generic. The recipients don’t always read them carefully in depth because the messages get lost in the overwhelming flood of other emails, advertising, and spam.

This came to mind earlier this week, when I received a personal letter in the mail from my friend in Toronto. He is one of only three friends who still take the time to actually take pen in hand and put their thoughts to paper. When I get letters from one of these three friends, it’s as if  shipments of gold have arrived.

A hand-written letter means someone has taken the time and effort to create a personal message. The words, themselves could be communicated in an email, but the time and effort required is far less than what is necessary to compose a sincere letter.

I keep personal, hand-written letters in a large, manila envelope as mementos. They seem more authentic than electronic messages, even if I print the emails on my printer. I love the handcrafted sincerity and truthfulness that can be cherished for posterity. 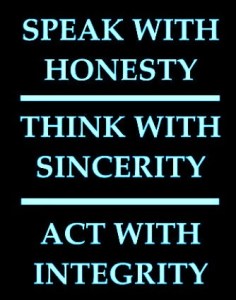 In the wider scope of life, sincerity frees us from confusion and deception. By maintaining a sincere demeanor we become examples that show others that delusions can be overcome. In the end, being sincere and truthful have no drawbacks to our integrity. We become spiritual oases to family and friends.

Insincerity and the lack of truthfulness reveal weakness of character. Insincerity and trust cannot coexist. The insincere person cannot even take refuge in her/himself. To be a parent, a friend, or a leader without sincerity and integrity one cannot be fully reliable and strong.

Perhaps the greatest fault is persistent secrecy. This habit is evil because it depends upon deception and lying by way of omission. The practice of secrecy is at its core, dishonesty.

As we have learned, dishonesty is a tempting trap that leads to ever more deception and disintegration. One cannot fulfill one’s true nature through insincerity and falsehood. When someone cannot fulfill his own true nature, yet expects others to fulfill theirs, the others learn to be deceitful and deceptive as well.

If a project or goal is advocated through deceitful, insincere techniques and messages, people will eventually distrust the integrity of said project or goal. People who are initially inspired by the deceit will eventually discover the truth. They will either rationalize the lies or will feel resentment about the deceptions. The insincerity and falsehoods are the fatal flaws of projects or goals. Disrespect is the final result.

In matters of personal and public interest, sincerity and truthfulness must not be dismissed for sakes of expediency and convenience. In fact, they should never be disregarded, at all.

An eclectic guy who likes to observe the world around him and comment about those observations.
View all posts by swabby429 →
This entry was posted in philosophy and tagged insincerity, integrity, sincerity, trust, trustworthiness, truthfulness. Bookmark the permalink.

4 Responses to Sincere And Truthful