The youngster saw the television advertisement dramatizing the excitement of “Power Rangers” underwear. He became so enthralled with the idea of owning a set of the underpants that he begged that his parents buy him a packet of the “Power Rangers” garments for Christmas. 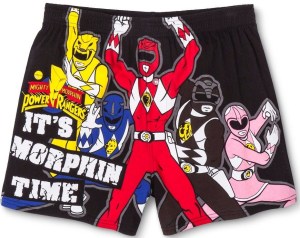 Christmas Day arrived and the child eagerly tore into his gifts. Among them was a packet of underpants but they were not “Power Rangers” brand. The kid felt dejected until his grandparents arrived with gifts. He opened the present from his grandfather and saw that the gift was a packet of “Power Rangers” underwear. The boy quickly went to his bedroom and changed into one of the garments, then returned to the family room. The kid did not magically transform into one of his favorite cartoon characters.

I found this charming story about failed expectations in a Reddit thread about disappointment. The Redditor went on to mention that his childhood Christmas was ruined because of his expectation of special underpants from his parents for Christmas. Then when he obtained them from his grandpa, the garments were not at all very special. The short tale was told in a light-hearted way, but I could sense the depth of disappointment the youngster probably experienced.

I reflected upon the problem of advertising directed towards children. Young kids are naïve and very vulnerable to hopeful messages. When the advertisers portray visions of excitement and fun they create hope in the minds of their young viewers. When those expectations are not met, the children’s hopes are deflated. The kids then experience disappointment, frustration, and even anger. Such actions violate the innocent trust of children. Aside from my concerns that such advertising techniques may be unethical, I do not believe that it is wise to set up fantastical expectations in the minds of little kids. Of course, this is just my opinion.

Meantime, most adults understand that being in control of our lives and having realistic expectations about our daily experiences go hand in hand with skillful living. When we are targeted as an audience for clever advertising, we are capable of filtering out much of the deceit. Being able to discern hype from reality is an important, adult skill.

When I wrote advertising copy and produced commercials for a living, I kept these problems in mind. I believed that an advertising client deserves a good product and I also believed that there should be no attempt to deceive the targets of that advertising. If I were to be a part of the advertising industry again, I would still hold myself up to this ethical standard.

Meantime, the same values should hold true in our own personal, private interactions with family and friends. It took me far too long to discover that many people do not hold similar values. I had always taken people at their words and believed the expectations they had helped create in my mind. After much disappointment and frustration with certain employers and acquaintances, I finally learned to temper my high expectations with discernment and skepticism. I still find myself with expectations of others. It’s a habit that I’m working on.

In my opinion, it seems best to have lowered or no expectations of others. I mean this in a non-cynical way. It is a realistic view that allows me to accept people as they are, which, in turn, fosters my own self-acceptance. Such a win-win attitude allows for a lighter mind with fewer resentments.

“I have learned that as long as I hold fast to my beliefs and values–and follow my own moral compass–then the only expectations I need to live up to are my own.”–Michelle Obama

The other side of the expectations coin regards the expectations others have about us. We can feel confined by how people perceive our gender, sexuality, race, nationality, financial status, age, and so forth. This is a major bugaboo for many of us. In my own case, it has taken a long time to realize that trying to meet other people’s expectations is futile. It has been a long journey away from being a people pleaser.

We have been taught to conform to certain patterns of behavior and beliefs according to the particular categories in which we are perceived by others and ourselves. The problems of conforming to stereotypes and society’s expectations are especially insidious. Only when we free ourselves of such constraints can we feel the refreshing air of freedom.

It’s important to set realistic expectations for oneself and be mindful of expectations others impose upon us. In doing so, our daily interactions will be more satisfying, regardless of whether one is navigating through a relationship or if one is wishing for special underpants.

The Blue Jay of Happiness quotes author, cosmologist, and theoretical physicist, the late Stephen Hawking. “When one’s expectations are reduced to zero, one really appreciates everything one does have.”

An eclectic guy who likes to observe the world around him and comment about those observations.
View all posts by swabby429 →
This entry was posted in cultural highlights, Meanderings, philosophy and tagged anticipation, disappointment, expectations, frustration. Bookmark the permalink.

4 Responses to To Expect