I have never, ever repaired windows until now. Prior to this year, cleaning the glass was the extent of my window maintenance efforts. After purchasing my home from the landlord, early this year, the window repair has loomed as a major challenge. In order to preserve the integrity of the building structure, window repair is the top priority ahead of all the other projects.

The north wall of the structure receives the brunt of severe storms and winter, in particular. The present windows were installed in 1959 or 1960 when the house was expanded. I’m guessing the windows have only been re-painted once since they were installed. In 2012, the house endured intense scrubbing from a severe hailstorm. Window panes were shattered and paint was mostly stripped from the wood surfaces.

My landlord had the storm window glass replaced but nixed the idea of paint. He did not give me permission to paint the damage. In fact, he 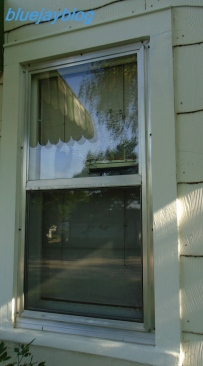 strictly prohibited it. So the windows have gone unprotected for seven years.

Late May finally arrived, and with it, some pleasant working weather. I tackled the window that had deteriorated most. Upon removal of the combination storm window, very serious rot had occurred behind the surface. Fabrication of new areas with a lot of putty was required. The house has asbestos siding and could not be disturbed by window removal. After two weeks of work, weather delays, and a badly injured finger, the crumbling, old window was repaired. There is a minor alignment problem at the lower left corner that I will adjust when the rest of the windows are fixed. 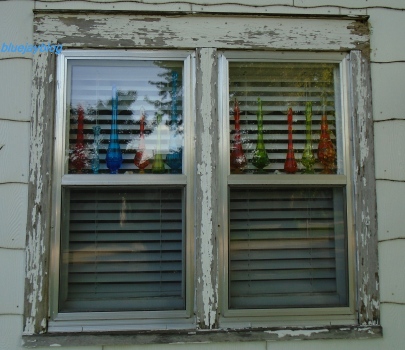 The second project entails a pair of windows that replaced the original 1920 window in 1960. These were slightly less of a challenge than the first window repair. The main rot was behind the surface, and at the bottoms of the vertical boards.  The frame was badly rotted and weather-beaten. 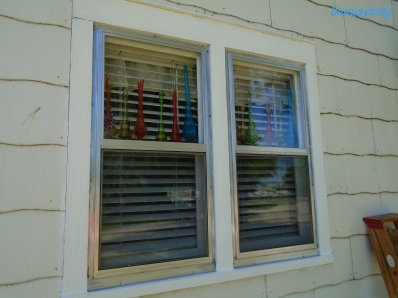 The use of plastic foam and a can of wood putty coupled with almost perfect weather, enabled me to complete the repair in less than a week.

There are ten more windows to fix, not counting three basement windows. The remaining windows should be far less challenging than the three north windows. The north door frame is also damaged from weather and heavy use. This will need fixing before autumn.

I predict slow progress this summer due to heat and other weather-related delays. Thankfully, the worst windows are fixed. They provide inspiration for the remainder of the work to come.

The Blue Jay of Happiness quotes chemist/physicist Marie Curie. “I was taught that the way of progress was neither swift nor easy.”

An eclectic guy who likes to observe the world around him and comment about those observations.
View all posts by swabby429 →
This entry was posted in Hometown, projects and tagged house restoration, window damage repair. Bookmark the permalink.

2 Responses to A Progress Report