Yesterday was a stay in the house day because of unpleasant weather. While pondering the situation, I decided to go through another carousel of old slides. After all, I have a projector screen that I found on eBay from someone who sold it as new, old stock. Why not finally try it out?

There were a lot of slides to view in the carousel, many of them were beginning to degrade due to age, so I restarted the 1980s archiving project.

Because of the large quantity of slides I archived yesterday, I decided to share a few of the more artistic night shots with you today. The images in this carousel had no descriptive notes, so the only image data I can recall are these: The original images were taken with a Canon AE-1 SLR film camera. Film may have been Fujichrome, Ektachrome, or Kodachrome. Most of the slides were shot on slow film 100 ISO or lower. All of these images were taken in the mid 1980s. 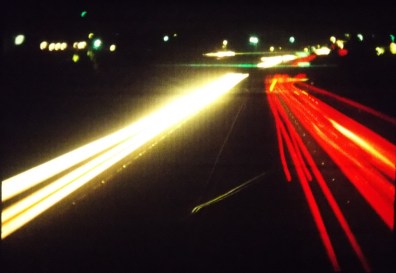 This freeway shot was taken from a pedestrian overpass in Los Angeles. I think the location was near San Fernando.

It was a muggy summer night just after sunset. The weather service had just issued a tornado warning for our town. I was in the process of broadcasting emergency information to our radio stations’ audiences. During a commercial break, I grabbed the camera and squeezed off a few frames of the dramatic, glowing sky.

One weekend I visited an old friend in a neighboring town. We strolled over to the town’s park to enjoy the peace and quiet. In those days, I carried the Canon and a tripod everywhere. So on a whim, I set up the equipment to take some time exposure shots. In this one I had my pal walk across the field of view. After locking the shutter in “bulb”, I placed my hand in front of the lens a few times while my friend walked. Exposure time was a pure guess. 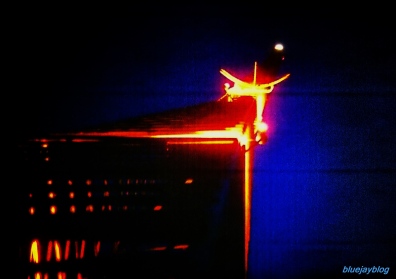 Norfolk, Nebraska’s AM radio station, WJAG, has its transmitter and tower a few miles west of town. One night I accompanied our station engineer to the transmitter site so he could perform equipment maintenance. The tower is an old fashioned free-standing type and is a tempting photographic subject. 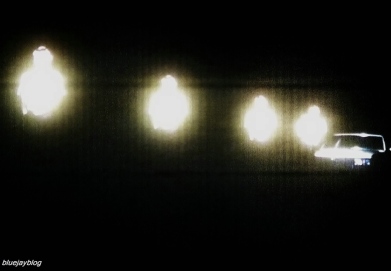 Another long time exposure took place out in the countryside. I set up the camera and tripod, then carried the flash unit at waist height and triggered it four times while walking. 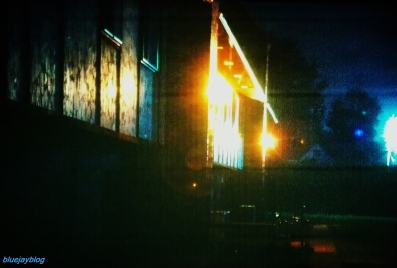 The last image was taken during a pleasant spring night in the parking lot of the apartment complex where I was living.

The Blue Jay of Happiness quotes photographer Bruno Barbey. “Photography is the only language that can be understood anywhere in the world.”

An eclectic guy who likes to observe the world around him and comment about those observations.
View all posts by swabby429 →
This entry was posted in art, Hobbies, photography and tagged archived images, photographic slides, time exposure. Bookmark the permalink.

1 Response to Some Vintage Night Slides