A Touch Of Cabin Fever

The blizzard raged on all day. The winds caused the snowdrifts to shift around to different places on the yard, driveway, and street. If I wanted to scoop snow off the concrete, it would return within just a few minutes. Even the state highway department recalled all the snowplows in order to wait out the storm. Anybody attempting to drive would only be tempting fate.

As I watched the snow flying horizontally in the 60 miles an hour gale, I felt trapped. There was no need to feel helpless. The day before the blizzard, I had stocked up on necessities like milk and bread. There were 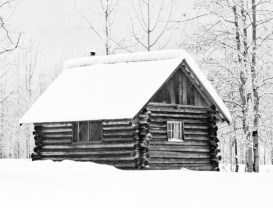 plenty of batteries for flashlights and the portable radio. There was no shortage of distractions either. The house could be cleaned, creativity could be harnessed for hobby projects, and the Internet was yet another option. There was no compelling need to leave the house for even a week.

The more I tried to rationalize against doing so, the urge to go outside of the house became stronger. Instead of enjoying the safety and comfort of the cozy haven of my little house, I felt like an inmate in a tiny frontier jail.

The imaginary hardship was really absurd. In olden times, the people who endured blizzards on the prairie, like Native Americans and the pioneers, found themselves sometimes stranded for months at a time. There were no highway department snow plows to dig them out. Supermarkets hadn’t been invented yet. The same for battery powered radios. Certainly there was no Internet in those days. When prairie dwellers got cabin fever, the suffering was often severe.

What about people who actually cannot go outdoors at will? NASA and other space agencies screen potential astronauts for mental stamina. Yet what kind of personality is required in order to endure a six-month stint aboard the International Space Station? How did Michael Collins deal with isolation in orbit while Neil Armstrong and Buzz Aldrin were down on the surface of the Moon making history?

I understand that there are plenty of tasks for astronauts to do aboard the ISS or inside of space capsules. However, their days are not a constant flurry of activities. There is time for rest and relaxation. Don’t they get even the slightest twinges of cabin fever? Since I don’t personally know an astronaut or a cosmonaut, how can I know for certain?

Thinking about nineteenth century blizzards on the prairie and astronauts isolated on the far side of the Moon didn’t alleviate my cabin fever. Such thoughts seemed to intensify it.

The next day, the storm subsided. The winds died down and the snowdrifts were deep and beautiful. It was time to go outdoors and carve out some paths with a shovel.

It would take a long time and plenty of physical effort to scoop away the snow from the driveway and sidewalks. The prospect of such a chore made me feel reluctant to leave the comfort of the little house.

The Blue Jay of Happiness ponders a thought from Apollo Eleven astronaut Michael Collins. “I knew I was alone in a way no earthling has ever been before.”

An eclectic guy who likes to observe the world around him and comment about those observations.
View all posts by swabby429 →
This entry was posted in Health, Meanderings, Science and tagged cabin fever, feeling trapped, isolation, restriction. Bookmark the permalink.