“If a reclusive monk discovers that he is living in a state of bliss and ecstasy, his poverty of human company becomes the ultimate in comfort. Should he give it up?” 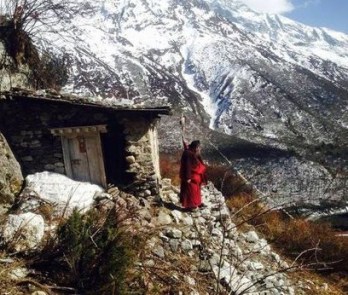 This puzzle came up last week when a pair of young Mormon missionaries dropped by the house to proselytize. Carlos, the slightly older spokesman,  had just introduced himself and his protégé Richard. Using his salesman skills, Carlos pointed at the “Laughing Buddha” figurine in my window to ask if I’m a Buddhist.

It was during the usual missionary pitch to discuss religion that Carlos popped the hermit scenario into the conversation. I answered that perhaps logically the monk should relinquish his comfortable poverty. Richard smiled during several seconds of silence, then looked towards his mentor to hear Carlos’ response.

Carlos then confessed that he wondered if he was becoming too hermit-like because of his love of reading and studying theological subjects. His obligatory two-year mission has been a way to examine his solitary preferences.

I understood that Carlos had pushed beyond his own comfort zone when he promptly changed the subject and asked if I had ever heard about The Book of Mormon. I mentioned that I own a copy that was printed in 1950 and that it is an interesting book. The three of us had a short conversation about the Church of Jesus Christ of Latter Day Saints then the missionaries departed.

I was disappointed that we had not talked about the somewhat monastic quality of some followers of the Mormon faith. If Carlos and Richard ever decide to knock on my door again, I want to discuss monasticism with them. It would be interesting if Carlos could expand on his own solitary nature. Although I do not subscribe to Mormonism, perhaps the young missionary and I have a few qualities in common.

The young missionary reminded me of close friends and loved ones who are introverted and prefer solitary lifestyles who force themselves out of their cubbyholes into the public sphere.

My ex-boyfriend says he would prefer to spend the rest of his days alone, just studying and perfecting magic tricks. His love of magic is in direct conflict with the necessity of having an audience. Performing is something he both dreads and enjoys. It’s just who he is.

My current partner likes to spend countless hours alone in nature. Yet he encounters the public in personal ways each day as a manager in a retail store. He’s not particularly religious, but his reclusive tendencies give him a sort of spiritual glow.

This happened to me, as well. Being a hermit is something very attractive and tempting to me. On the other hand, I spent decades behind the mic at radio stations. My audiences would probably be surprised to discover I’m not a gregarious extrovert. 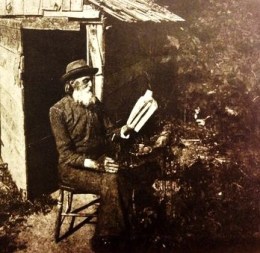 Many other performers and broadcasters are introverts and would adopt the lifestyle of a hermit at the drop of a hat. Their alone time is their major source of comfort. If Carlos could ask them his question about relinquishing solitude, they would likely say they do so every day.

Is this drive to live life as a hermit yet not get trapped in a box what Carlos the missionary also has?

There was a news story a few years ago that said that LDS Church elders want to rely less on door to door proselytizing and more on social media to recruit new members. This might be more efficient, but in the long run, the personal aspect is something they should not discard.

There’s something seedy about trolling Facebook for new members. Instead of using human missionaries, does the Church of Latter Day Saints plan to implement special algorithms? Future introverted missionaries with the desire to be hermits will no longer need to leave the comfort of their homes or temples.

Perhaps this is the reason I rarely see Mormon missionaries in the neighborhood anymore.

The Blue Jay of Happiness quotes “surf rock” guitarist Dick Dale. “I enjoy living like a hermit, but I cannot live like a hermit.”

An eclectic guy who likes to observe the world around him and comment about those observations.
View all posts by swabby429 →
This entry was posted in cultural highlights, Hometown, Meanderings, religion and tagged hermits, monks, Mormon missionaries, solitude. Bookmark the permalink.