The clinic appointment was 11:00 AM on the opposite part of town. I left home early because these days I do not like to hurry. Halfway to the destination, a slow-moving freight train approached the street crossing and the warning signals began flashing and ringing. I’d have to wait.

It seems that whenever I must be to a certain place by a certain time, a train holds me up. This is one reason I left for the health appointment early. However, this time, the train was perhaps three times longer than usual and it was traveling slower than normal. I could feel some anxiety building tension in my muscles.

After ten-minutes of waiting for the train to pass, car traffic could move again. The anxious feeling of the need to hurry subsided somewhat, but was still with me as I drove into the clinic parking lot. I made it to the appointment with a few minutes to spare.

Then I sat back in the waiting room to wait for the doctor to see me. Then I waited and waited some more. I had hurried to the clinic in order to wait for a few minutes of time with the doctor. This was such a stereotypical scenario that I smiled at the cliché. 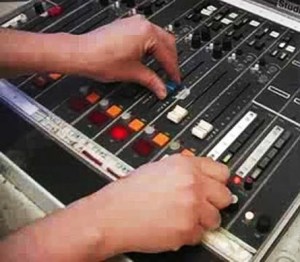 There’s a sort of Zen-like feeling when solo producing your own show on the fly with plenty of ad-libbing. If there was breaking news or severe weather, the tempo increased. There was no time to plan and analyze the next moves. It was hyper-paced working by “instinct” and habit. Program elements seemed to automatically fall into place. Broadcasting during a tornado warning is hurrying with a purpose. When the end of a severe weather shift arrived, there was a real, solid sense of accomplishment and deep satisfaction with a job well-done.

The particular pride in the fast-pace of live radio is missing with today’s automated and automation assisted broadcasting. It was the minute by minute, make it or break it aspect in real-time production of live broadcasting that yielded immense job-satisfaction. Now, for better or worse, there are virtual computer automation programs that take over most of the technical aspects of announcing.

It’s strange that hurrying to bide my time in a clinic waiting room triggered fond memories of radio. There is no going back to those days of never-ending deadlines, last-moment changes, plugging in tape cartridge recordings of commercials, cueing up vinyl records during breaks, and lots of ad-libbing.

It’s not so strange that pleasant reminiscing of a satisfying past should happen on a slow-paced Sunday. Thanks for tuning in and indulging my nostalgia today.

An eclectic guy who likes to observe the world around him and comment about those observations.
View all posts by swabby429 →
This entry was posted in cultural highlights, Entertainment, Hometown, Meanderings and tagged hurrying, impatience, lulls, patience, radio broadcasting. Bookmark the permalink.